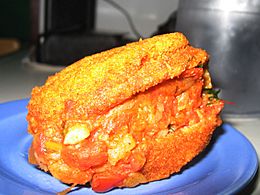 Acarajé is the most popular street food in the north eastern state of Brazil, Bahia. The recipe for acarajé was introduced to Bahia by slaves who came from Yorùbáland during the colonial period. In Nigeria acarajé is named Akara, and the women who sell it call out "Akara je", which means "Come and eat Akara" in Yoruba. So when freed Yorùbá slaves started to sell acarajé on the streets, they used the same technique and Brazilians assumed that they were selling acarajé.

Acarajé is made with black-eyed peas, garlic, ginger and salt, then deep fried in dende - a reddish oil from the palm fruit. When done, they are split in half and filled with vatapá, caruru, fried shrimp, salad and pepper. Brazilians modified the recipe from Nigeria a little and started to fill the acarajé with other afro-Brazilian foods. In Nigeria, none of the Brazilian accompaniments are served; just the bean cake is eaten, fried with palm oil or vegetable oil.

Acarajé are served on the streets by women who call themselves baiana do acarajé. They wear traditional clothes, white flowing dresses, sometimes turbans and colorful necklaces related to the rituals of the Afro-Brazilian religion Candomblé. In Nigeria, however, there is no ceremony and the women who sell Akara wear whatever they like. Nowadays, these baianas sell acarajé as a way of life and it’s something that helps to sustain their families.

In 2004, acarajé was declared part of Brazil's heritage culture in the region of Bahia. It's one of the most important symbols of the culture of Bahia and it's enjoyed by all types of tourists. They are delighted by the taste, color and relaxing way of eating acarajé on the streets.

All content from Kiddle encyclopedia articles (including the article images and facts) can be freely used under Attribution-ShareAlike license, unless stated otherwise. Cite this article:
Acarajé Facts for Kids. Kiddle Encyclopedia.