Salvador is a Brazilian city, capital of the state of Bahia. It has about 2.7 million inhabitants and an area of 709 square kilometres (274 sq mi).

In 2010, the city of Salvador had the 3rd most people in Brazil, after São Paulo and Rio de Janeiro.

Salvador is the second most popular tourism destination in Brazil, after Rio de Janeiro. Among the points of interest are its famous Pelourinho (named after the colonial pillories that once stood there) district, its historic churches, and its beaches.

In 1985 the Historic Centre of Salvador was made a World Heritage Site by UNESCO.

According to the Guinness Book of Records, the carnival or Carnaval of Salvador da Bahia is the biggest party on the planet. For an entire week, almost 4 million people celebrate throughout 25 kilometers (16 mi) of streets, avenues and squares. It takes about 100 thousand people to organize the event. Salvador has about 800 thousand visitors for this event.

The first books that arrived in Salvador were brought by the Jesuits. The first libraries or bookstores that appeared were under the control of the religious missionaries. They mostly had books on religion.

Salvador has a trade-wind tropical rainforest climate (Köppen: Af) Temperatures are relatively consistent, showing little variance throughout the course of the year. Salvador's driest months of the year are December and January, when the city receives on average less than 10 cm (4 in) of precipitation. Salvador's wettest months are April, May and June, when at least 20 cm (8 in) of rain falls during each of these three months. 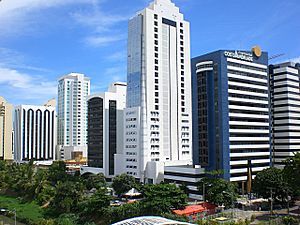 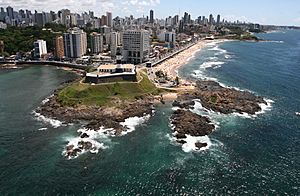 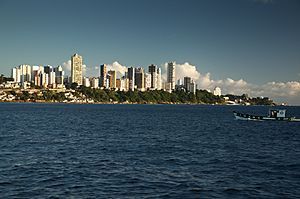 Skyscrapers in Vitória neighborhood, the most expensive address of the city 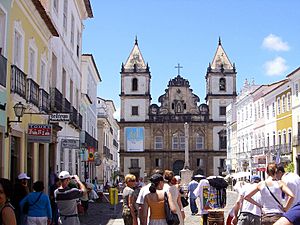 Convent and Church of São Francisco in Pelourinho

Throughout Brazilian history Salvador has played an important role. Because of its location on Brazil's northeastern coast, the city served as an important link in the Portuguese empire throughout the colonial era, maintaining close commercial ties with Portugal and Portuguese colonies in Africa and Asia.

Salvador remained the preeminent city in Brazil until 1763 when it was replaced as the national capital by Rio de Janeiro. In the last ten years many high-rise office and apartment buildings were constructed, sharing the same blocks with colonial-era housing or commercial buildings.

With its beaches, humid tropical climate, numerous up-to-date shopping malls (The Shopping Iguatemi was the first shopping mall in Northeastern Brazil) and pleasant high-class residential areas, the city has much to offer its residents.

Economically Salvador is one of Brazil's more important cities. Since its founding the city has been one of Brazil's most prominent ports and international trading centers. Boasting a large oil refinery, a petrochemical plant and other important industries, the city has made great strides in reducing its historical dependence on agriculture for its prosperity.

Salvador is the second most popular tourism destination in Brazil, after Rio de Janeiro. Tourism and cultural activity are important generators of employment and income, boosting the arts and the preservation of artistic and cultural heritage.

Chief among the points of interest are its famous Pelourinho (named after the colonial pillories that once stood there) district, its historic churches, and its beaches. Salvador's tourism infrastructure is considered one of the most modern in World, especially in terms of lodging. The city offers accommodation to suit all tastes and standards, from youth hostels to international hotels. Construction is one of the most important activities in the city, and many international (mainly from Spain, Portugal and England) and national developers are investing in the city and in the Bahian littoral zone.

Ford Motor Company has a plant in the Metropolitan Region of Salvador, in the city of Camaçari, assembling the Ford EcoSport, Ford Fiesta, Ford Fiesta Sedan. It was the first Automotive industry in Northeastern Brazil. The industry employs 800 engineers.

JAC Motors will have a plant in the Metropolitan Region of Salvador, in the city of Camaçari, the new industry will result 3,500 direct jobs and 10,000 indirect jobs, the production of 100,000 vehicles by year.

In December 2001, Monsanto Company inaugurated, at the Petrochemical Pole of Camaçari, in Metropolitan Region of Salvador, the first plant of the company designed to produce raw materials for the herbicide Roundup in South America. The investment is equivalent to US$500 million; US$350 million were spent in this initial phase. The Camaçari Plant, the largest unit of Monsanto outside of the United States, is also the only Monsanto plant manufacturing raw materials for the Roundup production line. The company started the civil works for the new plant in January 2000. 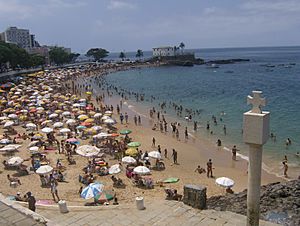 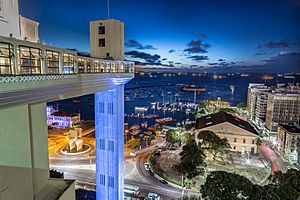 Salvador, capital of Bahia state, is the center of Afro-Brazilian culture. 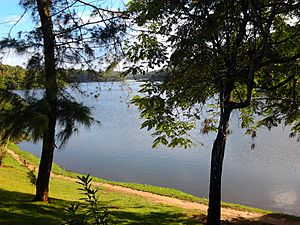 The Salvador coastline is one of the longest for cities in Brazil. There are 80 km (50 mi) of beaches distributed between the High City and the Low City, from Inema, in the railroad suburb to the Praia do Flamengo, on the other side of town. While the Low City beaches are bordered by the waters of the All Saints Bay (the country's most extensive bay), the High City beaches, from Farol da Barra to Flamengo, are bordered by the Atlantic Ocean. The exception is Porto da Barra Beach, the only High City beach located in the All Saints Bay.

The capital's beaches range from calm inlets, ideal for swimming, sailing, diving and underwater fishing, as well as open sea inlets with strong waves, sought by surfers. There are also beaches surrounded by reefs, forming natural pools of stone, ideal for children.

Interesting places to visit near Salvador include:

The city is served by many shopping malls, including Shopping Iguatemi, Salvador Shopping, Shopping Barra, and Shopping Paralela.

Jardim dos Namorados is located right next to Costa Azul Park and occupies an area of 15 hectares in Pituba, where many families used to spend their vacations in the 1950s. It was inaugurated in 1969, initially as a leisure area. It underwent a complete renovation in the 1990s, with the construction of an amphitheater with room for 500 people, sports courts, playgrounds and parking for cars and tourist buses.

Park of the City is an important preservation area of the Atlantic forest. It was completely renovated in 2001, becoming a modern social, cultural and leisure place. The new park has 720 square meter of green area right in the middle of the city. Among the attractions are Praça das Flores (Flowers square), with more than five thousand ornamental plants and flowers.

Besides its environment, the park has an infrastructure for children, with a special schedule of events taking place every October.

Created by state decree in 1973, Pituaçu Park occupies an area of 450 hectares and is one of the few Brazilian ecological parks located in an urban area. It is surrounded by Atlantic forest, with a good variety of plants and animals. There is also an artificial pond in the park, built in 1906 along with the Pituaçu Dam, whose purpose was to supply water to the city.

There are a number of possible leisure activities, ranging from cycloboats rides on the pond, to a 38 km (24 mi) long cycloway circling the entire reserve. A museum is also located in the park. Espaço Cravo is an outdoor museum with 800 pieces created by Mario Cravo, comprising Totems, winged and three-dimensional figures, as well as drawings and paintings.

Salvador's historical and cultural aspects were inherited by the intermarriage of such ethnic groups as Native-Indian, African and European. This mixture can be seen in the religion, cuisine, cultural manifestations, and custom of Bahia's people. African cultural practices are particularly celebrated. 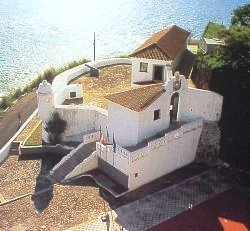 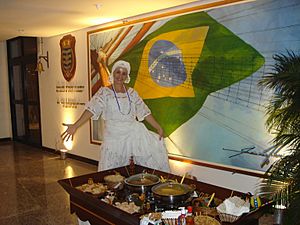 Acarajé is a traditional street food in Salvador.

The local cuisine, spicy and based on seafood (shrimp, fish), strongly relies on typically African ingredients and techniques, and is much appreciated throughout Brazil and internationally. The most typical ingredient is azeite-de-dendê, an oil extracted from a palm tree (Elaeis guineensis) brought from West Africa to Brazil during colonial times.

Using the milky coconut juice, they prepared a variety of seafood based dishes, such as Ensopados, Moquecas and Escabeche. The sugar cane bagasse was mixed with molasses and Rapadura, in the creation of coconut desserts like Cocada Branca and Preta. The remaining of the Portuguese Stew sauce was mixed with manioc flour to make a mush, which is a traditional Indian dish. In the markets of Salvador, it is possible to find stands selling typical dishes of the colonial era. In the Sete Portas Market, customers eat Mocotó on Friday nights since the 1940s, when the market was inaugurated. In the restaurants of Mercado Modelo, Sarapatel, stews and several fried dishes are served regularly. In the São Joaquim, Santa Bárbara and São Miguel markets, there are stands selling typical food. They are also sold at stands located on the beaches, specially crab stews and oysters. The restaurants that sell typical dishes are located mostly along the coast and in Pelourinho. They prepare a wide variety of recipes that take palm tree oil.

Salvador has many sport activities. The Fonte Nova Stadium, also known as Estádio Octávio Mangabeira is a football stadium started on January 28, 1951. It can hold 66,080 people. The stadium is owned by the Bahia government, and is the home ground of Esporte Clube Bahia. Its formal name honors Octávio Cavalcanti Mangabeira, a civil engineer, journalist, and former Bahia state governor from 1947 to 1954. The stadium is nicknamed Fonte Nova, because it is at Ladeira das Fontes das Pedras. The stadium was closed in 2007 due to an accident. The E.C. Bahia home matches now happen in another stadium, in Pituaçu.

Salvador has two large green areas for the practice of golf. Cajazeiras Golf and Country Club has a 18-hole course. Itapuã Golf Club has a 9-hole course. Tennis is very popular among Salvador's elites. Brasil Open, the country’s most important tournament, happens every year in Bahia.

During the last decades, volleyball has grown steadily in Salvador. It became popular after the gold medal won by Brazil in the 1992 Summer Olympics in Barcelona. The most important tournaments in Bahia are the State Championship, the State League tournament and the Primavera Games. There are also beach volleyball events. Salvador has had many international tournaments. Bowling is practiced both by teenagers and adults in Salvador.

Bahia's basketball league has competed since 1993. They have 57 teams. The sport is very popular in the city of Salvador, especially among students.

Rowing boat races started in the city more than a hundred years ago. It was first practiced by young men from traditional families, who spent their summer vacations there. With the recent fixing of the Dique do Tororó area, Salvador received new lanes for the practice of the sport.

All content from Kiddle encyclopedia articles (including the article images and facts) can be freely used under Attribution-ShareAlike license, unless stated otherwise. Cite this article:
Salvador, Bahia Facts for Kids. Kiddle Encyclopedia.