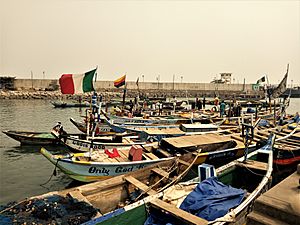 Cotonou is the economy capital of Benin. It is the largest city in that country. The city officially has 761,137 people, but it is thought that the actual number of people living in the city may be as high as 1.2 million. Many of the government and diplomatic services of Benin are in Cotonou. Because of this, the city is Benin's de facto capital, even though the official capital is Porto-Novo.

The city is best known as a major port because of the Autonomous Port of Cotonou. It is also home to an airport and a railway between it and Parakou. Other features of Cotonou include Cotonou Friendship Stadium, Cotonou Cathedral, Cotonou Central Mosque and the 20-hectare Dantokpa Market. The National University of Benin is in Cotonou.

The name 'Cotonou' means 'the mouth of the river of death' in the Fon language. At the beginning of the 19th century, Cotonou (then spelled Kotonou) was a small fishing village. The village was a part of the Kingdom of Dahomey. In 1851, the French made a treaty with the Dahomean King Ghezo. It let them build a place to trade at Cotonou. During the reign of Glele (1858-89), who ruled after Ghezo, the area was given to France by a treaty signed on May 19, 1868. In 1883, the French navy was at the city to stop the British from taking over the area. After Glele's death in 1889, his son Behanzin tried to challenge the treaty but he failed.

All content from Kiddle encyclopedia articles (including the article images and facts) can be freely used under Attribution-ShareAlike license, unless stated otherwise. Cite this article:
Cotonou Facts for Kids. Kiddle Encyclopedia.