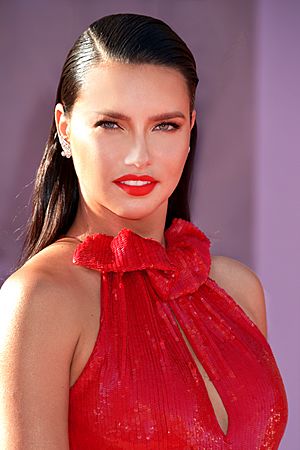 Adriana Lima (born June 12, 1981) is a Brazilian supermodel. She is well known for her work with underwear company Victoria's Secret.

Lima was born in Salvador, Bahia, Brazil on June 12, 1981 and is an only child to her parents Nelson Torres and Maria da Graça Lima, a social worker.

When she was 6 months old, her father left her and her mother. She has not talked to him since then. Since 2007 she has been trying to meet with him again.

She is married to Serbian basketball player Marko Jarić, and they have two daughters. In early 2014, the couple announced that they have separated.

All content from Kiddle encyclopedia articles (including the article images and facts) can be freely used under Attribution-ShareAlike license, unless stated otherwise. Cite this article:
Adriana Lima Facts for Kids. Kiddle Encyclopedia.