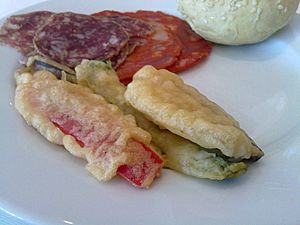 A plate of Peixinhos da horta

Peixinhos da horta (Portuguese pronunciation: [pɐjˈʃĩɲuʒ] or [pejˈʃĩɲuʒ ðɐ ˈɔɾtɐ]) is a Portuguse dish. Its name in Portuguese means "little fishes from the garden", as it looks like small pieces of colourful fish. It was brought to Japan by Portuguese sailors in the 16th century, where it became tempura.

Peixinhos da horta is usually made by covering green beans in a wheat flour batter and then deep frying it.

All content from Kiddle encyclopedia articles (including the article images and facts) can be freely used under Attribution-ShareAlike license, unless stated otherwise. Cite this article:
Peixinhos da horta Facts for Kids. Kiddle Encyclopedia.