A buñuelo ( alternatively called bimuelo, birmuelo, bermuelo, burmuelo, or bonuelo; Catalan: bunyol) is a fried dough fritter found in Southwest Europe, Latin America, and parts of Africa and Asia. It is traditionally prepared at Christmas, Ramadan, and among Sephardic Jews at Hanukkah. It will usually have a filling or a topping. In Mexican cuisine, it is often served with a syrup made with piloncillo.

Buñuelos are first known to have been consumed among Spain's Morisco population. They typically consist of a simple, wheat-based yeast dough, often flavored with anise, that is thinly rolled, cut or shaped into individual pieces, then fried and finished off with a sweet topping. Buñuelos may be filled with a variety of things, sweet or savory. They can be round in ball shapes or disc-shaped. In Latin America, buñuelos are seen as a symbol of good luck.

Fritters are known in Mediterranean cuisine from the work of Cato the Elder who included a recipe with the name "balloons" in his book De Agri Cultura, which was written in the second century BC. In that recipe, flour and cheese balls were fried and served with a spread made of honey and poppy seeds.

The society following the Roman one that consumed buñuelos was the Moorish. Its citizens, people of humble means, who inhabited the southern territories of the Iberian Peninsula and occupied low-level jobs, also served as street vendors selling buñuelos. In Seville and Granada, honey-fried buñuelos covered in honey were typical dessert. On the other hand, this specialty was adopted by the gypsies after the Moorish expulsion and perpetuated until today.

A 19th century recipe from California, described as pasta de freir (dough to fry), is made by folding whipped egg whites into a mixture of flour, water, sugar, oil and orange blossom water. This is used as a batter to fry apples or other fruit. A variation called suspiros de monjas (nun's sighs) includes butter and egg yolks. Buñuelos de Valparaiso are garnished with walnuts and sherry or maraschino flavored simple syrup. 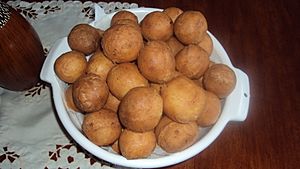 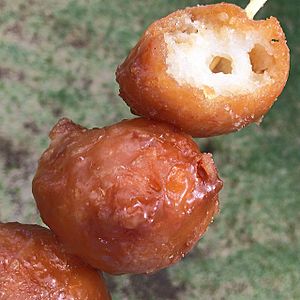 Cascaron, a Filipino derivative made with ground glutinous rice 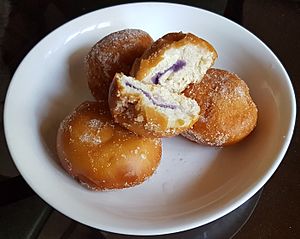 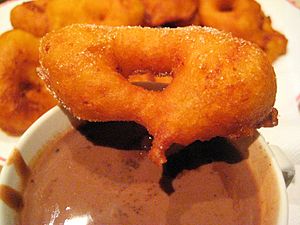 In Catalonia, they are consumed mostly during Lent. The most famous are those of wind, cream and Brunyols de l'Empordà. They are usually eaten as a snack or to accompany coffee after lunch.

In Valencia, the highest consumption is concentrated in festivities such as Fallas de Valencia, where pumpkin buñuelos are made.

In the Balearic Islands, there are sweet fritters for different parties of the year (Las Vírgenes, Todos los Santos, Lent, etc.) and, depending on the occasion, they can contain potato or sweet potato, Mahón cheese, dried figs, etc.

In Madrid and Andalusia, they are consumed with special assiduity during the Festival of Saints, during which it was customary for women to prepare them in the houses and sell them or give them to neighbors, especially in the villages.

In some regions of Spain, buñuelos find a strong competitor in churros, which are increasingly widespread at parties normally associated with buñuelos. On the other hand, in Catalonia, churros are primarily consumed by tourists; Catalans prefer the xuixos or chuchos in churrerías or the buñuelos in their multiple forms in bakeries or in houses.

There are also buñuelos in Turkey, India, and Russia. Jews in Turkey make buñuelos with matzo meal and eat them during Passover.

In many Latin American countries, this particular dish can also be made with flour tortillas, and covered in sugar or cinnamon.fr:Buñuelo vec:Frìtoła

All content from Kiddle encyclopedia articles (including the article images and facts) can be freely used under Attribution-ShareAlike license, unless stated otherwise. Cite this article:
Buñuelo Facts for Kids. Kiddle Encyclopedia.