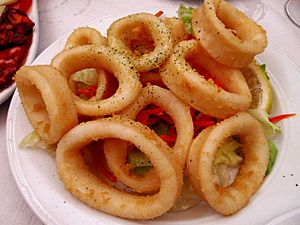 Squid is eaten in many cuisines; in English, the culinary name calamari is often used for squid dishes from the Mediterranean, notably fried squid (fried calamari). There are many ways to prepare and cook squid, with every country and region having its own recipes. Fried squid appears in Mediterranean cuisine. In Lebanon, Syria and Armenia, it is served with a tartor sauce. In New Zealand, Australia and South Africa, it is sold in fish and chip shops. In North America, it is a staple in seafood restaurants. In Britain it can be found in Mediterranean 'calamari' or Asian 'salt and pepper fried squid' forms in all kinds of establishments, often served as a bar snack, street food or starter.

Squid can be prepared for consumption in other ways. In Korea it is sometimes served raw, and elsewhere it is used as sushi, sashimi and tempura items, grilled, stuffed, covered in batter, stewed in gravy and served in stir-fries, rice, and noodle dishes. Dried shredded squid is a common snack in some Asian countries, including Japan and China.

All content from Kiddle encyclopedia articles (including the article images and facts) can be freely used under Attribution-ShareAlike license, unless stated otherwise. Cite this article:
Calamari Facts for Kids. Kiddle Encyclopedia.