Chicken soup is a soup made from chicken, simmered in water, usually with various other ingredients. The classic chicken soup consists of a clear chicken broth, often with pieces of chicken or vegetables; common additions are pasta, dumplings, or grains such as rice and barley. Chicken soup has acquired the reputation of a folk remedy for colds and influenza, and in many countries is considered a comfort food

Variations on the flavor are gained by adding root vegetables such as parsnip, potato, sweet potato and celery root, herbs such as parsley, dill, other vegetables such as zucchini, whole garlic cloves or tomatoes and black pepper. The soup should be brought slowly to a boil and then simmered in a covered pot on a very low flame for one to three hours, adding water if necessary. A clearer broth is achieved by skimming the drops of fat off the top of the soup as it is cooking, first bringing the chicken to boil from a pot of cold water and discarding the water before continuing, or straining it through a strainer or cheesecloth. Saffron or turmeric are sometimes added as a yellow colorant. Then, the chicken can be shredded by hand and stored in the refrigerator until ready for use in the soup.

Chicken soup can be a relatively low fat food: fat can be removed by chilling the soup after cooking and skimming the layer of congealed fat from the top. A study determined that "prolonged cooking of a bone in soup increases the calcium content of the soup.

Strictly speaking, chicken soup, unless qualified, implies that the soup is served as a thin broth, with pieces of meat, and possibly vegetables, and either noodles, rice, barley, or dumplings.

Cream of chicken soup is a thick, creamy, soup made with chicken stock and pieces, combined with milk (or cream) and flour, which might contain vegetable pieces, depending on the recipe. 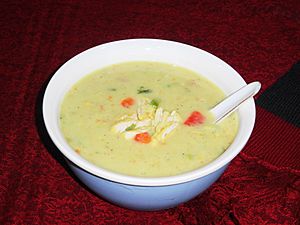 Several terms are used when referring to chicken soups:

All content from Kiddle encyclopedia articles (including the article images and facts) can be freely used under Attribution-ShareAlike license, unless stated otherwise. Cite this article:
Chicken soup Facts for Kids. Kiddle Encyclopedia.