Arroz con pollo (Spanish for rice with chicken) is a traditional dish of Latin America, closely related to paella. In the Dominican Republic it is alternately called locrio de pollo, and in Saint Martin it is called lokri or locreo.

Food writer Elisabeth Lambert Ortiz, pointing out the international aspects of the dish, notes the origin of arroz con pollo in the Spanish forms of pilaf, already reflecting international influences: chicken was brought from India and rice from Asia; saffron (used for the yellow colour in Spain, instead of annatto) was introduced by Phoenician traders; tomatoes and peppers (also known as sofrito) are natives of the Americas. 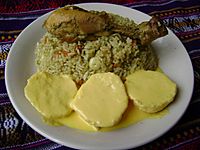 All content from Kiddle encyclopedia articles (including the article images and facts) can be freely used under Attribution-ShareAlike license, unless stated otherwise. Cite this article:
Arroz con pollo Facts for Kids. Kiddle Encyclopedia.