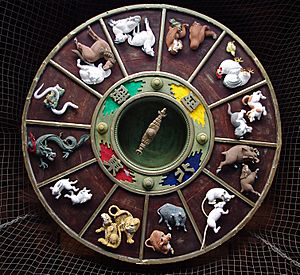 12 animals of the Chinese zodiac

The Chinese zodiac is a mathematical cycle of 12 animals. Each animal represents one year. People are associated with the zodiac animal for the year that they are born. The 12 animals in order are: Rat, Ox & Cow, Tiger, Rabbit, Dragon, Snake, Horse, Goat, Monkey, Rooster & Chicken, Dog, and Pig. Zodiac animals can also represent hours of the day and directions. Although it is called the Chinese zodiac, this system is also used in several other countries in Asia such as Korea, Japan, and Vietnam.

Some Chinese people believe that each zodiac animal has a personality, and people born in the same year may have similar personalities.

In the old days, China and Japan used a 12-hour system to tell the time of day and night (unlike the 24 hour system used today). The 12 hour system divides the day of 24 hours into 12 hours, each of which has a sign of the zodiac:

The Chinese and Japanese would call the different directions (North, Northeast, Northwest, East, South, Southeast, Southwest, West), based on the names of the zodiac animals.

All content from Kiddle encyclopedia articles (including the article images and facts) can be freely used under Attribution-ShareAlike license, unless stated otherwise. Cite this article:
Chinese Zodiac Facts for Kids. Kiddle Encyclopedia.