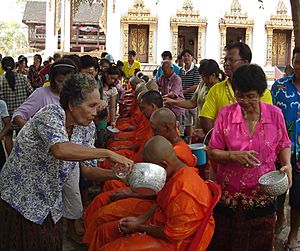 Monks receiving blessing at a temple

Songkran is a festival held every year in Thailand on April 13. It celebrates the traditional New Year in the Thai calendar. The festival lasts for 3 days. People celebrate Songkran by throwing water at each other. It is also known as the Water Festival. People believe that water will wash away bad luck. It is also a time to visit family and give gifts. People go to the temple to pray and give food to monks. They also clean the Buddha images in temples with water and perfumes.

And the legend of the important ladies on Songkran Day is Nang Songkran. The seven daughters of Kabil Maha Phrom. They have their own names, but most of people called them as Nang Songkran or the Songkran Ladies and they ride on the animals. She stands on the animal’s back if she comes in the morning rides on its back if she comes in the afternoon. For instance, in the year 1951, the Songkran Lady named Kimitha appeared on the 13th April at 1 o'clock 17 minutes and 56 seconds in the morning. She reclined with her eyes closed on the back of a buffalo. The time she appears is when the sun first enters the sign of Aries which heralds the beginning of Songkran New Year's Day..

All content from Kiddle encyclopedia articles (including the article images and facts) can be freely used under Attribution-ShareAlike license, unless stated otherwise. Cite this article:
Songkran Facts for Kids. Kiddle Encyclopedia.