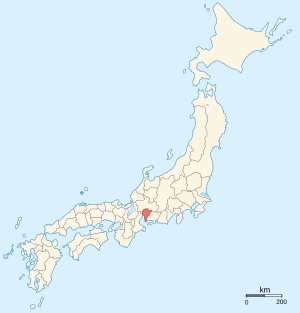 Owari Province (尾張国code: ja is deprecated , Owari no Kuni) was an old province of Japan in the area of Aichi Prefecture on the island of Honshū. including much of modern Nagoya. It is also known as Bishū (尾州).

The ancient capital of Owari was near Inazawa 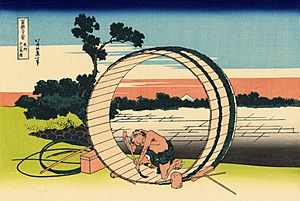 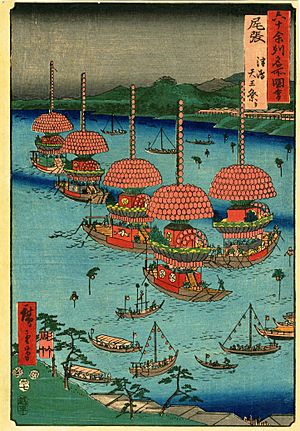 Ukiyo-e print by Hiroshige, Owari, from The Famous Scenes of the Sixty States (六十余州名所図会), depicting a festival at Tsushima Shrine

The province was created in 646.

In the Edo period, the Tōkaidō road was the main route between the Imperial capital at Kyoto and the main city of the Tokugawa Shogunate. The road passed through Owari.

In the Meiji period, the provinces of Japan were converted into prefectures. The maps of Japan and Owari Province were reformed in the 1870s.

Owari and Mino provinces were separated by the Sakai River.

Masumida jinja was the chief Shinto shrine (ichinomiya) of Owari.

All content from Kiddle encyclopedia articles (including the article images and facts) can be freely used under Attribution-ShareAlike license, unless stated otherwise. Cite this article:
Owari Province Facts for Kids. Kiddle Encyclopedia.