Seiji Ozawa (小澤 征爾, Ozawa Seiji, born September 1, 1935) is a Japanese conductor known for his advocacy of modern composers and for his work with the San Francisco Symphony, the Toronto Symphony Orchestra, the Vienna State Opera and the Boston Symphony Orchestra where he served as music director for 29 years. He is the recipient of numerous international awards.

Ozawa was born on September 1, 1935, to Japanese parents in the Japanese-occupied city of Mukden. When his family returned to Japan in 1944, he began studying piano with Noboru Toyomasu, heavily studying the works of Johann Sebastian Bach. After graduating from the Seijo Junior High School in 1950, Ozawa broke two fingers in a rugby game. As he was unable to continue studying the piano, his teacher at the Toho Gakuen School of Music, Hideo Saito, brought Ozawa to a life-changing performance of Beethoven's Piano Concerto No. 5, which ultimately shifted his musical focus from piano performance to conducting. He went to the Toho Gakuen School of Music, graduating in 1957.

Almost a decade after the sports injury, Ozawa won the first prize at the International Competition of Orchestra Conductors in Besançon, France. His success there led to an invitation by Charles Münch, then the music director of the Boston Symphony Orchestra, to attend the Berkshire Music Center (now the Tanglewood Music Center), where he studied with Munch and Pierre Monteux. In 1960, shortly after his arrival, Ozawa won the Koussevitzky Prize for outstanding student conductor, Tanglewood's highest honor. Receiving a scholarship to study conducting with famous Austrian conductor Herbert von Karajan, Ozawa moved to West Berlin. Under the tutelage of von Karajan, Ozawa caught the attention of prominent conductor Leonard Bernstein. Bernstein then appointed him as assistant conductor of the New York Philharmonic where he served during the 1961–1962 and 1964–1965 seasons. While with the New York Philharmonic, he made his first professional concert appearance with the San Francisco Symphony in 1962. Ozawa remains the only conductor to have studied under both Karajan and Bernstein.

In December 1962 Ozawa was involved in a controversy with the prestigious Japanese NHK Symphony Orchestra when certain players, unhappy with his style and personality, refused to play under him. Ozawa went on to conduct the rival Japan Philharmonic Orchestra instead. From 1964 until 1968, Ozawa served as the first music director of the Ravinia Festival, the summer home of the Chicago Symphony Orchestra. In 1969 he served as the festival's principal conductor.

Between 1964 and 1973, Ozawa directed various orchestras; he became music director of the Boston Symphony Orchestra in 1973. His tenure at the BSO was maintained for 29 years, the longest tenure of any music director, surpassing the 25 years held by Serge Koussevitzky.

Ozawa won his first Emmy Award in 1976, for the Boston Symphony Orchestra's PBS television series, Evening at Symphony. In 1994, the BSO dedicated its new Tanglewood concert hall "Seiji Ozawa Hall" in honor of his 20th season with the orchestra. In 1994, he was awarded his second Emmy for Individual Achievement in Cultural Programming for Dvořák in Prague: A Celebration.

In an effort to merge all-Japanese orchestras and performers with international artists, Ozawa, along with Kazuyoshi Akiyama, founded the Saito Kinen Orchestra in 1992. Since its creation, the orchestra has gained a prominent position in the international music community.

In the same year, he made his debut with the Metropolitan Opera in New York. He created a controversy in 1996–1997 with sudden demands for change at the Tanglewood Music Center, which made Gilbert Kalish and Leon Fleisher resign in protest.

In 1998, Ozawa conducted a simultaneous international performance of Beethoven's Ode to Joy at the opening ceremony of the 1998 Winter Olympics in Nagano, Japan. Ozawa conducted an orchestra and singers in Nagano, and was joined by choruses singing from Beijing, Berlin, Cape Town, New York and Sydney – as well as the crowd in the Nagano Olympic Stadium. This was the first time a simultaneous international audio-visual performance had been achieved.

A controversy subsequently developed over various perceptions of the quality of Ozawa's work with the BSO. Ozawa stepped down from the BSO music directorship in 2002.

Ozawa has been an advocate of 20th-century classical music, giving the premieres of a number of works, including György Ligeti's San Francisco Polyphony in 1975 and Olivier Messiaen's opera Saint François d'Assise in 1983. He also became known for his unorthodox conducting wardrobe, where he wore the traditional formal dress with a white turtleneck, not the usual starched shirt, waistcoat, and a white tie.

In 2001, Ozawa was recognized by the Japanese government as a Person of Cultural Merit. In 2002, he became principal conductor of the Vienna State Opera. He continues to play a key role as a teacher and administrator at the Tanglewood Music Center, the Boston Symphony Orchestra's summer music home that has programs for young professionals and high school students. On New Year's Day 2002, Ozawa conducted the Vienna New Year's Concert. In 2005, he founded Tokyo Opera Nomori [fr] and conducted its production of Richard Strauss's Elektra. On February 1, 2006, the Vienna State Opera announced that he had to cancel all his 2006 conducting engagements because of illness, including pneumonia and shingles. He returned to conducting in March 2007 at the Tokyo Opera Nomori. Ozawa stepped down from his post at the Vienna State Opera in 2010, to be succeeded by Franz Welser-Möst. 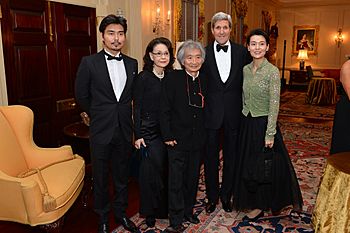 Ozawa (center) and his family with U.S. Secretary of State John Kerry at the 2015 Kennedy Centers Honor dinner in Washington, D.C.

In October 2008, Ozawa was honored with Japan's Order of Culture, for which an awards ceremony was held at the Imperial Palace. He is a recipient of the 34th Suntory Music Award (2002) and the International Center in New York's Award of Excellence.

On January 7, 2010, Ozawa announced that he was canceling all engagements for six months in order to undergo treatments for esophageal cancer. The doctor with Ozawa at the time of the announcement said it was detected at an early stage. Ozawa's other health problems have included pneumonia and lower back surgery. Following his cancer diagnosis, Ozawa and the novelist Haruki Murakami embarked on a series of six conversations about classical music that form the basis for the book Absolutely on Music.

On December 6, 2015, Ozawa was honored at the Kennedy Center Honors.

Ozawa holds honorary doctorate degrees from Harvard University, the New England Conservatory of Music, the University of Massachusetts Amherst, National University of Music Bucharest, and Wheaton College. He is a Member of Honour of the International Music Council.

Ozawa has three brothers, Katsumi, Toshio, and Mikio, the latter becoming a music writer and radio host in Tokyo. Ozawa is married to Miki Irie ("Vera"), a former model and actress, born in 1944 in Yokohama and who is a quarter Russian and three-quarters Japanese; he was previously married to the pianist Kyoko Edo. Ozawa has two children with Irie, a daughter named Seira and a son named Yukiyoshi. During his tenure with the Boston Symphony Orchestra, Ozawa opted to divide his time between Boston and Tokyo rather than move his family to the United States as he and his wife wanted their children to grow up aware of their Japanese heritage.

Ozawa and the cellist and conductor Mstislav Rostropovich formed a travelling musical group during the later stages of Rostropovich's life, with the goal of giving free concerts and mentoring students across Japan.

All content from Kiddle encyclopedia articles (including the article images and facts) can be freely used under Attribution-ShareAlike license, unless stated otherwise. Cite this article:
Seiji Ozawa Facts for Kids. Kiddle Encyclopedia.