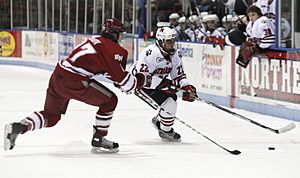 Northeastern University playing hockey against the University of Massachusetts Amherst

Hockey East is a group of American colleges and universities who play NCAA Division I hockey against one another every season. Before the Notre Dame men's hockey team (in Indiana) joined in 2013, all of the members were in New England. The champions are automatically invited to the NCAA Division I men's and women's hockey tournaments.

The current members are listed below. Unless otherwise noted, these schools have both men's and women's teams in the conference.

In July 2014, Connecticut, now a member only for women's hockey, will move its men's team into Hockey East. One year later, Merrimack, a member in men's hockey only, will upgrade its women's team from club to full varsity status and move that team into the conference.

All content from Kiddle encyclopedia articles (including the article images and facts) can be freely used under Attribution-ShareAlike license, unless stated otherwise. Cite this article:
Hockey East Facts for Kids. Kiddle Encyclopedia.