The West Virginia Mountaineers are the athletic teams of West Virginia University. The school is a member of National Collegiate Athletic Association Division I. The Mountaineers have been a member of the Big 12 Conference since 2012. At that time, the Mountaineers joined the Mid-American Conference as an affiliate member for men's soccer. The two major sports at the university are football (played at Mountaineer Field at Milan Puskar Stadium) and basketball (played at the WVU Coliseum), although many of the other sports have large followings as well. The West Virginia University athletic program also has the honor of being the only school in the nation in 2007 to win a BCS game, a NCAA Men's Basketball Tournament game, and a NCAA Women's Basketball Tournament game.

Below are 5 national team titles that were not bestowed by the NCAA:

For rifle, a sport in which fewer than 40 NCAA member schools participate, the Mountaineers are a member of the single-sport Great America Rifle Conference and have won the most NCAA Rifle Championships of any school at 18.

The West Virginia Rugby Football Club was established in 1974, and is the oldest established club sport at WVU. In the fall of 2013, WVU won the Keystone Conference and qualified for the American Collegiate Rugby Championship, where they lost to Kutztown in the quarterfinals. In the spring of 2014, WVU reached the D1-AA national playoffs, where they defeated Princeton 41–24, but lost in the quarterfinals 34–14 to San Diego. The Mountaineers play their home games at the Mylan Park Athletic Field Complex. The Mountaineers have been led by Head Coach Glover since spring of 2013. 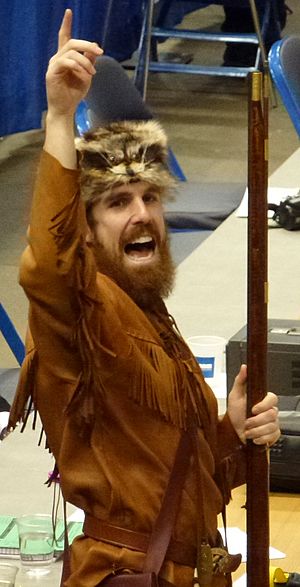 The Mountaineer was adopted in 1890 as the official school mascot and unofficially began appearing at sporting events in 1936. A new Mountaineer is selected each year during the final two men's home basketball games, with the formal title "The Mountaineer of West Virginia University." The new Mountaineer receives a scholarship, a tailor-made buckskin suit with coonskin hat, and a period rifle and powder horn for discharging when appropriate and safe. The mascot travels with most sports teams throughout the academic year. While not required, male mascots traditionally grow a beard. Jonathan Kimble, a Franklin, WV native (pictured) is the new 2012-2013 WVU Mountaineer, Kimble officially took over as the official mascot at the annual spring football game.

Designed by sports artist John Martin, The "Flying WV" is the most widely used logo in West Virginia athletics. It debuted in 1980 as a part of a football uniform redesign by Coach Don Nehlen, and was adopted as the official logo for the university in 1983. While the "Flying WV" represents all university entities, unique logos are occasionally used for individual departments. Some examples include the script West Virginia logo for the WVU Department of Intercollegiate Athletics, and the interlocking WV logo used in baseball.

In addition to the official fight songs of West Virginia university, the fan response to John Denver's "Country Roads" (arrangement by Dr. James Miltenberger) has made it the unofficial song of the university and the state of West Virginia.

The West Virginia University Alma Mater was composed in 1937, and is sung before every home football game.

The upperclassmen of 1890 selected the official colors of "old gold and blue" from the West Virginia state seal. While the official school colors are old gold and blue, a brighter gold is used in official university logos and merchandise. This change in color scheme is often cited for the lack of a universal standard for colors during 19th century when the university's colors were selected. Additionally, the brighter gold is argued to create a more intimidating environment for sporting events. The university accepts "gold and blue" for the color scheme, but states clearly that the colors are not "blue and gold", to distinguish West Virginia from its rival school the University of Pittsburgh.

The West Virginia University Mountaineer Marching Band is nicknamed "The Pride of West Virginia". The 390-member band performs at every home football game and makes several local and national appearances throughout the year. The band was the recipient of the prestigious Sudler Trophy in 1997.

Firing of the Musket

The Mountaineer mascot carries a period Musket and powder horn for firing a shot to signal the opening of several athletic events. The Mountaineer points the gun into the air with one arm and fires a blank shot, a signal to the crowd to begin cheering at home football and basketball games. The Mountaineer also fires the musket every time the team scores during football games. 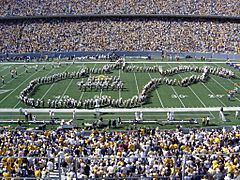 Formation of the state

Formation of the State 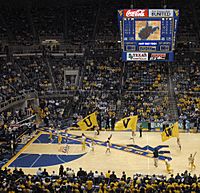 Carpet roll at a basketball game

The "WVU First Down" cheer is used when fans are expecting a first down call during a football game. Prior to the announcement, fans put their arms in the air and yell while waiting for the call. After the announcement, the fans lower and raise their arms three times while simultaneously yelling the initials "WVU". Then, the fans clap and signal to the end zone while cheering "first down!"

In 1955, Fred Schaus and Alex Mumford devised the idea of rolling out an elaborate gold and blue carpet for Mountaineer basketball players to use when taking the court for pre-game warm-ups. In addition, Mountaineer players warmed up with a special gold and blue basketball. The university continued this tradition until the late 1960s when it died out, but former Mountaineer player Gale Catlett reintroduced the carpet when he returned to West Virginia University in 1978 as head coach of the men's basketball team. 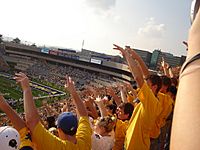 The WVU student section perform the first down cheer at a home football game.

In a state that lacks professional sports franchises, the citizens of West Virginia passionately support West Virginia University and its athletics teams. West Virginia fans are nationally known for following their Mountaineers to bowl games and games throughout the country. West Virginia games also have received high TV ratings throughout the years. Men's basketball head coach Bob Huggins, a former Mountaineer basketball player who was born in Morgantown, stated that the "strong bond between the university and the people of West Virginia" is a relationship that is difficult for non-natives to understand. Former basketball player Da'Sean Butler cited the fan support as a factor in his decision to play for WVU, saying "everybody loves our school to death" in reference to the fan base in West Virginia.

West Virginia fans have also been recognized for their hospitality. In the first football game played by the University of Connecticut following the death of Jasper Howard, a banner displayed at Mountaineer Field in the Connecticut entrance tunnel read "Today we are all Huskies". Connecticut fans described the warmth of the environment as impressive, citing the number of WVU fans who offered condolences. In a letter to WVU, then UConn head football coach Randy Edsall wrote:

"The response that you gave our team before and after the game was tremendous and greatly appreciated. The pregame moment of silence and team handshake was the most moving experience I have ever had in my 29 years of coaching football."

Some WVU fans, primarily in the student sections, have developed a reputation for unruly behavior, being compared to "soccer hooligans" by GQ magazine. At some events, there have been cases of objects thrown onto the field or at opposing teams. There were previously also issues with small-scale fires, most notably of couches, being set after games; over 1,100 intentionally ignited street fires were reported from 1997 to 2003. The tradition of igniting furniture continues to this day, including the celebration after the WVU basketball team won the Big East title. Fires have sometimes occurred in response to non-sporting events, such as following the announcement that Osama bin Laden had been killed.

All content from Kiddle encyclopedia articles (including the article images and facts) can be freely used under Attribution-ShareAlike license, unless stated otherwise. Cite this article:
West Virginia Mountaineers Facts for Kids. Kiddle Encyclopedia.