Seton Hall is made up of eight different schools and colleges. It has about 5,200 undergraduate students and about 4,400 graduate students. Its School of Law has 1,200 students. US News & World Report lists the School of Law as one of the top 100 law schools in the United States.In 2011, Seton Hall's Stillman School of Business is ranked 88 out of the top 100 undergraduate business schools. It is #3 in the state of New Jersey according to BusinessWeek. 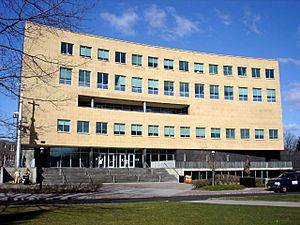 Jubilee Hall on the campus.

The school's sports teams are called the Pirates. They play in the NCAA's Division I and in the Big East Conference. The college started its first basketball team in 1903. Seton Hall stopped having a football team in 1982.

Seton Hall also has club sports in ice hockey, rugby union, and Men's volleyball. Almost all the Seton Hall sports have their home field on the South Orange campus. The men's ice hockey team and the men's basketball team play at the Prudential Center in Newark, New Jersey.

All content from Kiddle encyclopedia articles (including the article images and facts) can be freely used under Attribution-ShareAlike license, unless stated otherwise. Cite this article:
Seton Hall University Facts for Kids. Kiddle Encyclopedia.