Benny the Bull facts for kids 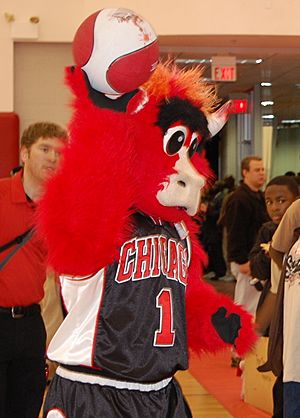 Benny the Bull, commonly known as Benny, is the mascot of the Chicago Bulls of the National Basketball Association. He has been the official mascot since 1969. Benny is one of the longest-tenured mascots in the NBA and in all of professional sports.

For more than 40 years, Benny the Bull has been entertaining Chicago Bulls fans, first at Chicago Stadium (1969–1994), and then at the United Center (1994–present). In 2013, Benny was named the most popular mascot in sports by Forbes.

He wears a jersey with the name "Benny" with the number "1" above on his back. Benny sports several different costumes based on the theme of the game as well as his overall "mood". Benny the Bull can also do many different kinds of dances.

All content from Kiddle encyclopedia articles (including the article images and facts) can be freely used under Attribution-ShareAlike license, unless stated otherwise. Cite this article:
Benny the Bull Facts for Kids. Kiddle Encyclopedia.