Joakim Simon Noah born February 25, 1985) is a professional basketball player for the New York Knicks of the National Basketball Association (NBA). Born in New York City to a Swedish mother and a French father, he holds American, Swedish and French citizenship. He played college basketball for the Florida Gators, winning back-to-back NCAA championships in 2006 and 2007.

The Chicago Bulls selected Noah with the ninth overall pick in the 2007 NBA draft. Noah is a two-time NBA All-Star and was named to the All-NBA First Team in 2014 when he also was named the NBA Defensive Player of the Year. 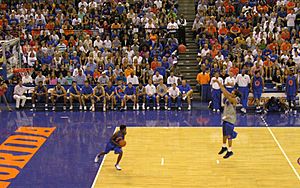 Noah was born in New York City, to French singer and former world No. 3 tennis player Yannick Noah, winner of the French Open in 1983, and Cécilia Rodhe, Miss Sweden and fourth runner-up at Miss Universe 1978. His grandfather Zacharie Noah was a Cameroonian professional football player, winner of the Coupe de France in 1961. Noah lived in Paris, France from 1988 to 1998 and returned to New York City at age 13.

Considered a four-star recruit by Rivals.com, Noah was listed as the No. 19 power forward and the No. 75 player in the nation in 2004. 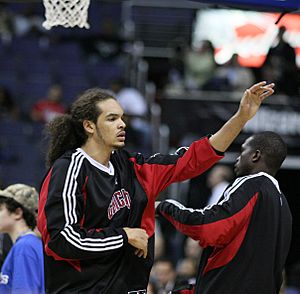 Noah holds citizenship with the United States, France, and Sweden. Since 2008 Noah has lived in Bannockburn, Illinois.

In 2010, with his mother, an artist, Noah founded the Noah's Arc Foundation to help engage children with positive self-expression through arts and sports. The foundation has a special focus on at-risk youth in Chicago. 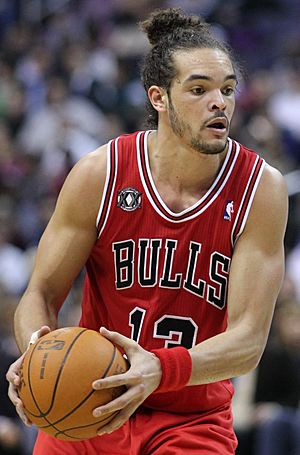 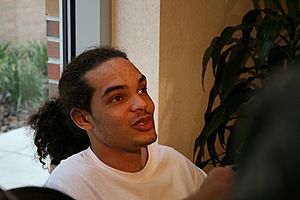 All content from Kiddle encyclopedia articles (including the article images and facts) can be freely used under Attribution-ShareAlike license, unless stated otherwise. Cite this article:
Joakim Noah Facts for Kids. Kiddle Encyclopedia.