Lawrenceville is an unincorporated community and census-designated place (CDP) located within Lawrence Township in Mercer County, New Jersey, United States. As of the 2010 United States Census, the CDP's population was 3,887. Lawrenceville is located roughly halfway between Princeton and Trenton.

Lawrenceville is also known as the "village of Lawrenceville". Its core is the Main Street Historic District, which was listed in the New Jersey and National Registers of Historic Places in 1972, one of the first registered historic districts in New Jersey.

Lawrenceville was founded as Maidenhead in 1697, as part of Burlington County in the colony of West Jersey. In 1714, the village became a part of Hunterdon County. In 1798, the New Jersey Legislature legally incorporated the Township of Maidenhead.

The original name was adopted for Maidenhead, a historic English town on the Thames River, about 30 miles west from London. The Colonial Supreme Court at Burlington officially confirmed the name on February 20, 1697. "Maidenhead" derives from the Anglo Saxon word "Maidenhythe," meaning "new wharf", though it acquired a secondary meaning as a term for virginity.

The Rev. Issac V. Brown, the first full-time pastor of the Presbyterian Church of Lawrenceville and the founder of the Academy of Maidenhead (now the Lawrenceville School), led a movement to petition the Legislature to change the town's name. The petition said "... it must be the wish of every good citizen... to be relieved of the necessity of using a term which may offend the delicacy of modesty, or disturb the feelings of seriousness, or excite the sneers of the willing".

The Legislature officially changed the name from Maidenhead to Lawrence on January 24, 1816, at a meeting in John Moore's Tavern. The township took its name from Captain James Lawrence, a naval hero of the War of 1812. The village was renamed Lawrenceville at the same time. In 1838, Mercer County was formed from parts of three counties, and Lawrence Township was included in the new County. The Township's boundaries and geographic relationships have remained the same since that time.

Cornwallis stayed overnight in Maidenhead on December 8, 1776, en route to Trenton. Cornwallis recorded the moment in his diary, a portion of which was found years later in John Moore's Tavern, which is now a residential house at 2695 Main Street. His opinion of the village was that "one night in Maidenhead was more than enough".

When the Presbyterian Church of Lawrenceville was built in 1698, it was called the Meetinghouse of Maidenhead. It is still serving the community at 2688 Main Street.

U.S. Route 206 changes its name from "Lawrenceville-Princeton Road" to "Main Street", and then to "Lawrenceville-Trenton Road" in the center of Lawrenceville. The local historic district fronts along Main Street and U.S. Route 206 stretch for more than two miles between Franklin Corner Road and an area slightly north of Fackler Road. Homes situated more than 250 feet from the road are excluded, however. One exception is the section of The Lawrenceville School known as the Circle and several other buildings in its vicinity, the oldest buildings on the campus. This area itself has been designated a National Historic Landmark.

Lawrenceville generally comprises the area contained within Lawrenceville-Pennington Road to the south, Fackler Road to the north, Keefe Road to the west, and U.S. Route 206, part of which turns into Main Street in Lawrenceville, to the east. The Lawrenceville School, across Route 206, is usually considered part of the village as well. Before tract development, beginning in the early 1970s, Lawrenceville was broadly defined as stretching two to three blocks back from Route 206. The boundary became less clear as residential developments replaced farmland behind the historic village.

Lawrenceville is equidistant between Trenton and Princeton, almost being equidistant from New York and Philadelphia, with it being roughly fifteen miles closer to Philadelphia. Major transportation corridors have passed through Lawrenceville since the town's inception, including The King's Highway, which in the 18th century approximated today's U.S. Route 206.

There were 1,734 households out of which 27.1% had children under the age of 18 living with them, 48.5% were married couples living together, 9.5% had a female householder with no husband present, and 39.7% were non-families. 33.1% of all households were made up of individuals, and 9.1% had someone living alone who was 65 years of age or older. The average household size was 2.24 and the average family size was 2.90. 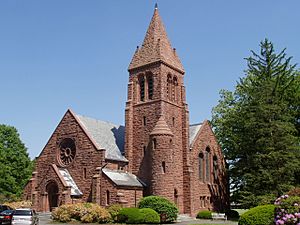 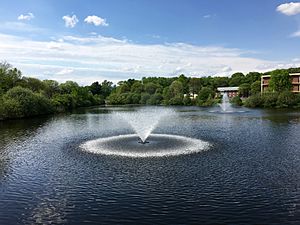 Lawrenceville is home to the Lawrenceville School, a private boarding and day high school founded in 1810. It is one of the oldest and most prestigious prep schools in the United States.

People who were born in, residents of, or otherwise closely associated with Lawrenceville include:

All content from Kiddle encyclopedia articles (including the article images and facts) can be freely used under Attribution-ShareAlike license, unless stated otherwise. Cite this article:
Lawrenceville, New Jersey Facts for Kids. Kiddle Encyclopedia.