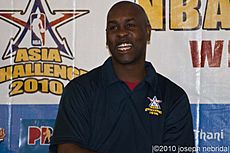 Gary Dwayne Payton Sr. (born July 23, 1968 in Oakland, California) is an American retired professional basketball player. He started at the point guard position. He is best known for his 13-year time with the Seattle SuperSonics, and holds Seattle franchise records in points, assists, and steals. He also played with the Milwaukee Bucks, Los Angeles Lakers, Boston Celtics and Miami Heat, the last with whom he won an NBA championship. He was nicknamed "The Glove" by his cousin during the 1993 Western Conference Finals against the Phoenix Suns when he held his opponent Kevin Johnson defensively "like a glove" on the court. He was inducted into the Naismith Memorial Basketball Hall of Fame on September 8, 2013. Payton is considered by many to be the greatest defensive guard of all time and one of the greatest defenders in basketball history. He used his quick feet in order to master the art of staying in front of his opponent on defense. He was also one of the best at guarding Michael Jordan, although in the 1996 NBA Finals the Sonics largely used Hersey Hawkins to guard Jordan. Payton's best teammate for many years was All-Star Shawn Kemp, and the Sonics had many deep playoff runs including playing in the 1996 NBA Finals.

Payton is widely considered one of the best point guards of all time and is the only point guard who has won the NBA Defensive Player of the Year award, which he won in 1996. He was selected to the NBA All-Defensive First Team nine times, an NBA record he shares with Michael Jordan, Kevin Garnett and Kobe Bryant. He was also a nine-time NBA All-Star and a nine-time All-NBA Team member.

Payton ranks fourth in steals, eighth in assists and 32nd in points among the NBA's career leaders. Payton is also considered one of the greatest college basketball players of all time and ranks among all-time leaders in assists and steals.

Payton is also known by the much lesser used nickname GP, an initialism for his first and last name, which he even at one point had as a license plate. One of his sons, Gary Payton II, has played in the NBA as well.

All content from Kiddle encyclopedia articles (including the article images and facts) can be freely used under Attribution-ShareAlike license, unless stated otherwise. Cite this article:
Gary Payton Facts for Kids. Kiddle Encyclopedia.