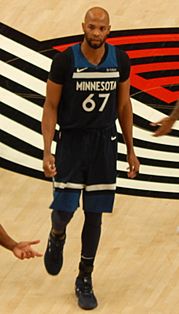 Taj Jami Gibson (born June 24, 1985) is an American professional basketball player who is a player for the Chicago Bulls since 2009. He began his career in 2006 when he played for the USC.

Gibson was born on June 24, 1985 in Brooklyn, New York. He studied at Telecommunications High School, at Calvary Christian High School, and at the University of Southern California.

All content from Kiddle encyclopedia articles (including the article images and facts) can be freely used under Attribution-ShareAlike license, unless stated otherwise. Cite this article:
Taj Gibson Facts for Kids. Kiddle Encyclopedia.