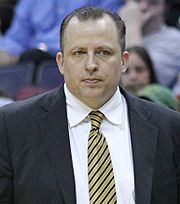 Tom Thibodeau (born January 17, 1958 in New Britain, Connecticut) is an American basketball coach. He was the head coach of the Chicago Bulls. He was the assistant coach for many teams in the National Basketball Association including the Philadelphia 76ers, for the New York Knicks, and for the Boston Celtics.

He won NBA Coach of the Year in 2011and in 2012 he won the NBA All-Star Game head coach. In 2012, he became the fastest coach in NBA history to earn 100 victories and finished as the runner-up for Coach of the Year.

All content from Kiddle encyclopedia articles (including the article images and facts) can be freely used under Attribution-ShareAlike license, unless stated otherwise. Cite this article:
Tom Thibodeau Facts for Kids. Kiddle Encyclopedia.