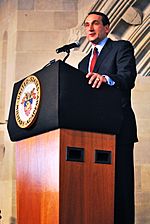 Michael William "Mike" Krzyzewski ( born February, 13, 1947) is an American college basketball coach. He is sometimes referred to as Coach K. He was born in Chicago and went to school at the United States Military Academy, where he played guard. He served in the Army as a basketball coach, and was later the coach of the U.S. Military Academy's basketball team. In 1980, Krzyzewski became the head coach at Duke University, where he has been for 31 years. His teams have been to the NCAA Tournament 27 times, been to the Final Four 11 times, and won 4 national championships. Krzyzewski has also been the coach of the United States national basketball team since 2006. He was elected to the Basketball Hall of Fame in 2001.

All content from Kiddle encyclopedia articles (including the article images and facts) can be freely used under Attribution-ShareAlike license, unless stated otherwise. Cite this article:
Mike Krzyzewski Facts for Kids. Kiddle Encyclopedia.