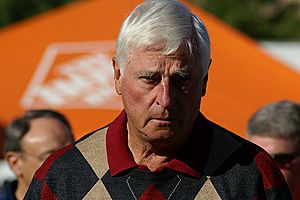 Robert Montgomery "Bob" Knight (born October 25 1940) is a retired American basketball sports coach. He won over 900 NCAA Division I men's college basketball games. Knight is well known as the head coach of the Indiana Hoosiers from 1971–2000. He also coached for the Texas Tech from 2001–2008.

Knight was born in Massillon, Ohio. He studied at Ohio State University.

He has been praised for having a clean program. None of his teams was ever sanctioned by the NCAA for any recruitment violations. He has, however, attracted some controversy for throwing a chair across the courts during a game. He was once arrested for assault. He was fired from Indiana in mid September 2000.

In April 2015, it was announced that ESPN would not sign Knight's contract for another season.

All content from Kiddle encyclopedia articles (including the article images and facts) can be freely used under Attribution-ShareAlike license, unless stated otherwise. Cite this article:
Bob Knight Facts for Kids. Kiddle Encyclopedia.