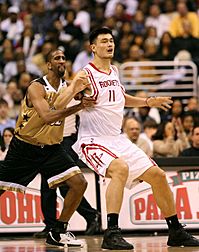 This is a Chinese name; the family name is Yao.

Yao Ming (Chinese: 姚明; pinyin: Yáo Míng; born September 12, 1980) is a former Chinese professional basketball player. He played for the Houston Rockets of the National Basketball Association (NBA). He was the tallest player in the NBA, at 7 feet 6 inches (2.29 m).

Yao was born in Shanghai, People's Republic of China. He started with the Shanghai Sharks as a teenager and played on their senior team for five years in the Chinese Basketball Association (CBA). The team won a championship in his final year. Then he entered the 2002 NBA Draft. The CBA had to release him, and he was selected by the Houston Rockets to play on their team. He had also been chosen to play for the NBA All-Star Game for all six of his seasons. However, the Rockets have not advanced past the first round of the playoffs since he joined the team, and he has also had injuries in each of the past three seasons. On July 20, 2011, Yao announced that he was retiring from basketball after many foot and ankle injuries.

Yao is married to Ye Li, who used to play for the China women's national basketball team. He is one of China's best-known athletes. He has sponsorships with several major companies, and he has been the richest celebrity in China for six straight years, earning US$51 million (CN¥357 million) in 2008.

His rookie year in the NBA was the subject of a documentary film, The Year of the Yao, and he recently wrote an autobiography titled Yao: A Life in Two Worlds.

All content from Kiddle encyclopedia articles (including the article images and facts) can be freely used under Attribution-ShareAlike license, unless stated otherwise. Cite this article:
Yao Ming Facts for Kids. Kiddle Encyclopedia.