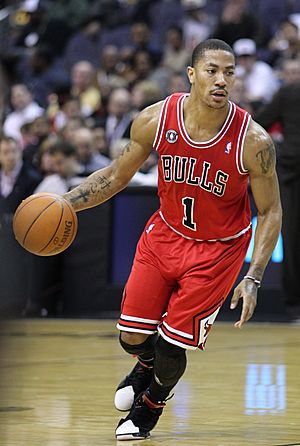 Derrick Martell Rose Sr. (born October 4, 1988 in Chicago, Illinois) is an American basketball player. He currently plays for the Detroit Pistons. He plays at the position of point guard. He attended college at University of Memphis where he played basketball with the Memphis Tigers. Rose was drafted out of college by the Chicago Bulls with the 1st overall pick in the 1st round of the 2008 NBA Draft. Rose was named the 2011 NBA Most Valuable Player. He is the youngest person to win an NBA MVP.

On June 22, 2016, Rose was traded to the New York Knicks. He signed with the Cleveland Cavaliers in the off season.

All content from Kiddle encyclopedia articles (including the article images and facts) can be freely used under Attribution-ShareAlike license, unless stated otherwise. Cite this article:
Derrick Rose Facts for Kids. Kiddle Encyclopedia.