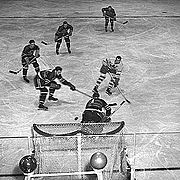 In many team sports, the defence or defense is the action of those players responsible for preventing the other team from scoring. The term may also refer to the tactics involved in defense. It can also be a specialty team whose primary responsibility is defense. Similarly, a defense player or defender is a player who is tasked with stopping the other team from scoring. The defender also protects their own team's goalkeeper or goaltender. This is in association football, ice hockey, water polo and many other sports.

In American football the defense is the part of the team that is tasked with preventing the other team's ball carrier from scoring. The defense consists of 11 players.

All content from Kiddle encyclopedia articles (including the article images and facts) can be freely used under Attribution-ShareAlike license, unless stated otherwise. Cite this article:
Defense (sports) Facts for Kids. Kiddle Encyclopedia.