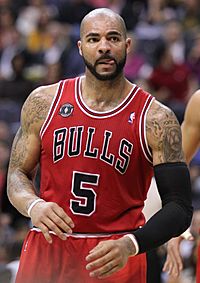 Carlos Boozer (born November 20, 1981 in Aschaffenburg, West Germany) is a American basketball player who played for the Chicago Bulls from 2010 to 2014. He now plays for the L.A. Lakers

Boozer was drafted out of Duke University by the Cleveland Cavaliers and played with them in the 2002-03 and 2003-04 NBA seasons.

All content from Kiddle encyclopedia articles (including the article images and facts) can be freely used under Attribution-ShareAlike license, unless stated otherwise. Cite this article:
Carlos Boozer Facts for Kids. Kiddle Encyclopedia.