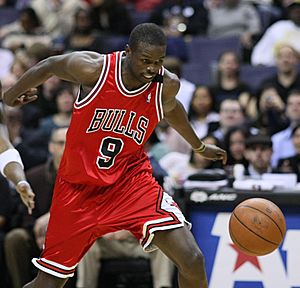 Luol Deng (born April 16, 1985 in Wau, Sudan, currently in South Sudan) is a NBA basketball player. He plays with the Miami Heat. He was drafted by the Phoenix Suns with the 7th pick of the 1st round in the 2004 NBA Draft. Deng played previously with the Chicago Bulls and the Cleavland Cavaliers. He played college basketball for the Duke Blue Devils. Deng also plays for the Great Britain national basketball team. Deng has Sudanese and British citizenships.

All content from Kiddle encyclopedia articles (including the article images and facts) can be freely used under Attribution-ShareAlike license, unless stated otherwise. Cite this article:
Luol Deng Facts for Kids. Kiddle Encyclopedia.