The area had been known as Smith's Mill and was later called Butts Bridge (variously spelled as "Butt's Bridge" and "Butts' Bridge"), named for a family that owned the eponymous crossing of the Paulins Kill.

Blairstown was incorporated as a township by an act of the New Jersey Legislature on April 14, 1845, from portions of Knowlton Township, based on the results of a referendum held that day. The township was named for John Insley Blair.

Blairstown CDP (with a 2010 Census population of 515) is a unincorporated community and census-designated place (CDP) located within the township.

The Township's economic data (as is all of Warren County) is calculated by the United States Census Bureau as part of the Allentown–Bethlehem–Easton metropolitan area which also includes Carbon County, Lehigh County and Northampton County counties in Pennsylvania.

There were 2,124 households out of which 32.8% had children under the age of 18 living with them, 66.8% were married couples living together, 9.4% had a female householder with no husband present, and 19.8% were non-families. 15.8% of all households were made up of individuals, and 6.3% had someone living alone who was 65 years of age or older. The average household size was 2.78 and the average family size was 3.11.

There were 2,040 households, out of which 35.0% had children under the age of 18 living with them, 69.6% were married couples living together, 7.3% had a female householder with no husband present, and 19.7% were non-families. 15.3% of all households were made up of individuals, and 7.1% had someone living alone who was 65 years of age or older. The average household size was 2.81 and the average family size was 3.14.

CR 521 is the main county road that passes through in the eastern section while Route 94 passes runs east-west through the center of the township.

While Interstate 80 (Bergen-Passaic Expy) passes through briefly in the southern part without any interchanges, it is accessible via Routes 94 and 521 in neighboring Knowlton and Hope Townships, respectively.

Blairstown Airport (1N7) is located southwest of the central business district. It is the home of Yards Creek Soaring, which offers glider rides where you can see Blairstown from the air.

The Lackawanna Cut-Off, a high-speed, double-track railway line that stretches for 28.45 miles (45.79 km) was constructed by the Delaware, Lackawanna and Western Railroad between 1908 and 1911, opening for service on December 24, 1911. It ran west from Port Morris, New Jersey to Slateford, Pennsylvania and passed through Blairstown. The DL&W RR merged with the Erie Railroad on October 17, 1960, to form the Erie-Lackawanna Railroad. Due to declining revenues, passenger service over the Lackawanna Cut-Off was discontinued on January 5, 1970, and freight service ceased in 1979, just three years after the E-L was absorbed into the Consolidated Railroad Company (Conrail). The tracks remained relatively dormant until 1984, when the property was sold to a developer and rails removed. The right of way is now the property of the State of New Jersey, and plans are underway for the restoration of rail service in the future. Blairstown's poured concrete passenger and freight stations still stand, although privately owned. 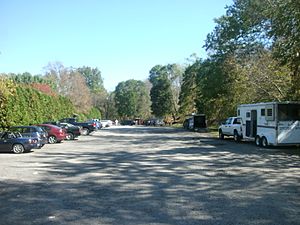 The former Blairstown New York, Susquehanna and Western Railroad station site, as seen in October 2011, as a parking lot for Foot Bridge Park.

Blairstown was also served by a second railroad, the Blairstown Railway. The little short line, a personal project of the local industrial magnate John Insley Blair, was constructed in 1876 from Blairstown to Delaware, NJ, where it connected with the Old Main Line of the Lackawanna RR. The Blairstown Railway was absorbed by the New York, Susquehanna & Western Railroad in 1882 as it built west to the coal fields of Pennsylvania. The NYS&W also operated passenger service between Blairstown and New York (via Jersey City, NJ) until 1935. A third railroad, the Lehigh & New England Railroad, operated through Blairstown via trackage rights over the NYS&W between Swartswood Junction and Hainesburg Junction until October 31, 1961, when the L&NE was abandoned. With the loss of L&NE trackage rights revenues and little local business to sustain the line, the NYS&W also abandoned its line through Blairstown shortly thereafter, and the tracks were removed in 1962. The right of way today has been preserved by the State of New Jersey as the 26-mile (42 km) long Paulinskill Valley Trail.

The Blairstown Township School District serves public school students in kindergarten through sixth grade at the Blairstown Elementary School. As of the 2017–18 school year, the district, comprised of one school, had an enrollment of 469 students and 46.9 classroom teachers (on an FTE basis), for a student–teacher ratio of 10.0:1. Students from Hardwick Township, a non-operating school district, also attend Blairstown Elementary School.

Students in seventh through twelfth grades for public school attend the North Warren Regional High School in Blairstown, a public secondary high school, serving students from the townships of Blairstown, Frelinghuysen, Hardwick and Knowlton. As of the 2017–18 school year, the high school had an enrollment of 820 students and 77.6 classroom teachers (on an FTE basis), for a student–teacher ratio of 10.6:1.

Ridge and Valley Charter School, a K-8 charter school founded in 2004 that is focused on Earth literacy and sustainable living, is located in neighboring Frelinghuysen Township. The school also serves (and grants admission priority to) students from Frelinghuysen, Hardwick and Knowlton Townships, who attend the school without cost to the parents. Students from the township and from all of Warren County are also eligible to attend Warren County Technical School in Washington borough (for 9-12), with special education services provided by local districts supplemented throughout the county by the Warren County Special Services School District in Oxford Township (for PreK-12).

Students from across the world attend Blair Academy, a private boarding school for students in grades 9-12 established in 1848 by philanthropist John Insley Blair.

People who were born in, residents of, or otherwise closely associated with Blairstown include:

All content from Kiddle encyclopedia articles (including the article images and facts) can be freely used under Attribution-ShareAlike license, unless stated otherwise. Cite this article:
Blairstown, New Jersey Facts for Kids. Kiddle Encyclopedia.