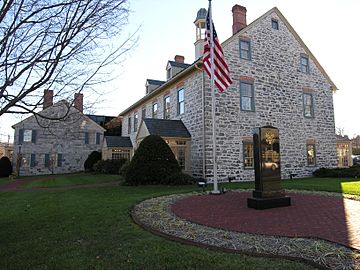 The Moravian Church in Hope, NJ is now the headquarters for the Bank of Hope.

Hope Township is one of the earliest planned communities in the United States, having been established by German Moravians in 1769. They knew what they wanted to achieve, which is shown on several early planning maps, which detail streets, homes, wells, businesses, farms, a school, tavern and church.

Prior to the arrival of the Moravians, there was no distinct town, but several families farmed on Jenny Jump Mountain, to the south of Hope, in surrounding area and on John Samuel Green Jr.'s farm in the center of what is now the Village. Throughout the 1760s, Moravians from Bethlehem, Pennsylvania traveled through this area on their way to New England to establish new communities. They lodged overnight with the Green Family who were impressed with their religion and way of life. 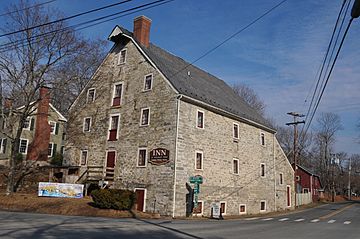 The Moravians were a religious group whose formal name was the "Unitas Fratrum" or Unity of the Brethren. They were followers of Jan Hus, the reformer from Prague who protested against the Roman Catholic Church in 1415 and was finally burned at the stake for his rebellion. These followers continued to practice his views in Moravia and Bohemia in what is now the Czech Republic, hence the common name "The Moravians". In the late 17th century this group began to be persecuted and sought shelter away from Bohemia. Count Nicolas Ludwig von Zinzendorf offered them refuge on his lands east of Dresden, Germany, and provided a base for them to regroup and pursue their religion. That settlement which remains as the center of the worldwide Moravian religion is called Herrnhut or "The Lord's Watch" inhabitants were not only "under the Lord's watchful care" but were also to be "on watch for the Lord". With the support of Count von Zinzendorf, the Church established over 200 missionary settlements.

After a formal survey of the Village completed on November 26, 1774, the community was officially accepted by The Moravian Church and the name was changed by drawing lots on February 8, 1775, from Greenland to Hope. The name derives from the "hope of immortality" of the early Moravian settlers.

After almost 40 years of the Moravian "experiment" in Hope, the community was sold and almost all of the Moravians returned to Bethlehem or Nazareth, Pennsylvania. The basic reason for closing the community was that it was never self-supporting and had declined from its height of population of 147 to under 100 people by the early 19th century. The Church in Germany could no longer subsidize such a small village. Moravians worldwide were selling possessions and even some other entire communities to pay off debts incurred years earlier by Count von Zinzendorf, who heavily mortgaged his lands to give them opportunity back in Germany. Disease and a competitive gristmill also contributed to Moravian Hope's decline.

Hope CDP (with a 2010 Census population of 195), Mount Hermon (141) and Silver Lake (368) are unincorporated communities and census-designated places (CDPs) located within the township.

Other unincorporated communities, localities and place names located partially or completely within the township include Feebletown, Locust Lake, Mount Herman and Swayzes Mill.

There were 741 households out of which 29.8% had children under the age of 18 living with them, 62.2% were married couples living together, 8.5% had a female householder with no husband present, and 24.7% were non-families. 19.6% of all households were made up of individuals, and 7.7% had someone living alone who was 65 years of age or older. The average household size was 2.63 and the average family size was 3.03.

There were 697 households, out of which 36.9% had children under the age of 18 living with them, 68.3% were married couples living together, 5.7% had a female householder with no husband present, and 22.7% were non-families. 19.7% of all households were made up of individuals, and 6.7% had someone living alone who was 65 years of age or older. The average household size was 2.71 and the average family size was 3.12. 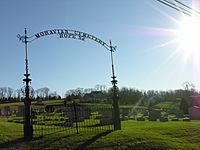 The gate to the Moravian Cemetery in Hope, NJ appeared in the horror movie, Friday the 13th.

The Hope Township School District serves students in pre-kindergarten through eighth grade at Hope Township Elementary School. As of the 2018–19 school year, the district, comprised of one school, had an enrollment of 131 students and 16.7 classroom teachers (on an FTE basis), for a student–teacher ratio of 7.8:1. In the 2016–17 school year, the district was tied for the 30th-smallest enrollment of any school district in the state.

Students in public school for ninth through twelfth grades from Harmony Township, Hope Township and White Township attend Belvidere High School in Belvidere as part of sending/receiving relationships with the Belvidere School District. As of the 2018–19 school year, the high school had an enrollment of 420 students and 38.3 classroom teachers (on an FTE basis), for a student–teacher ratio of 11.0:1.

Students from the township and from all of Warren County are eligible to attend Ridge and Valley Charter School in Frelinghuysen Township (for grades K-8) or Warren County Technical School in Washington borough (for 9-12), with special education services provided by local districts supplemented throughout the county by the Warren County Special Services School District in Oxford Township (for PreK-12).

People who were born in, residents of, or otherwise closely associated with Hope Township include:

All content from Kiddle encyclopedia articles (including the article images and facts) can be freely used under Attribution-ShareAlike license, unless stated otherwise. Cite this article:
Hope Township, New Jersey Facts for Kids. Kiddle Encyclopedia.