Knowlton Township was created by Royal charter on February 23, 1763, from portions of Oxford Township, while the area was still part of Sussex County, and was incorporated as a township by an act of the New Jersey Legislature on February 21, 1798, and then became part of the newly created Warren County on November 20, 1824. Portions of the township were taken to form Hope Township (April 8, 1839) and Blairstown Township (April 14, 1845).

Knowlton's name is variously attributed to Thomas Knowlton, a Colonel in the Continental Army during the American Revolutionary War who was killed in action at the Battle of Harlem Heights, or to the knolls that characterize the area. The township is served by postal ZIP codes in Columbia (07832) and Delaware (07833), although a small number of Knowlton residents receive postal deliveries via the Blairstown (07825) post office. Within the township are several small hamlets, including Browning, Deckers Ferry, Mount Pleasant, Polkville, Ramseyburg, Warrington and Knowlton itself.

Columbia (with a 2010 Census population of 229), Delaware (150) and Hainesburg (91) are unincorporated communities and census-designated places (CDPs) located within the township. 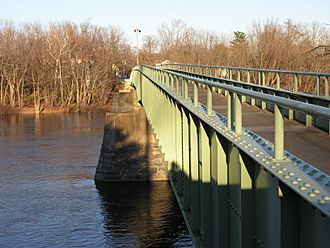 The Portland-Columbia Pedestrian Bridge replaced the last of the covered bridges spanning the Delaware River in this photo facing towards New Jersey. The original covered bridge was destroyed by the remnants of Hurricane Diane on August 19, 1955, a storm that caused record flooding throughout the region, but particularly within the watershed of the Delaware.

There were 1,097 households out of which 33.5% had children under the age of 18 living with them, 66.5% were married couples living together, 8.3% had a female householder with no husband present, and 21.2% were non-families. 16.3% of all households were made up of individuals, and 6.7% had someone living alone who was 65 years of age or older. The average household size was 2.75 and the average family size was 3.10. 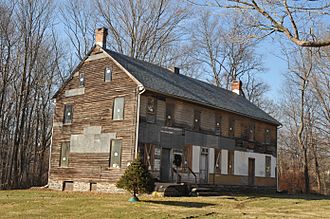 Ramsayburg Homestead, listed on the National Register of Historic Places

There were 1,028 households, out of which 40.0% had children under the age of 18 living with them, 69.1% were married couples living together, 6.6% had a female householder with no husband present, and 20.6% were non-families. 15.0% of all households were made up of individuals, and 7.1% had someone living alone who was 65 years of age or older. The average household size was 2.87 and the average family size was 3.21. 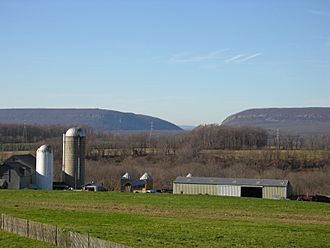 Knowlton Township's rural character is evident in this view of the Delaware Water Gap from Linaberry Road.

Tunnel Field is the primary recreational site in the township with several baseball and softball diamonds and soccer fields. Tunnel also has a play area (including swings and play area), a basketball court and concession stand. The field is located by Route 94 and is divided by the Lackawanna Cut-Off and is connected through an old tunnel (hence the name). 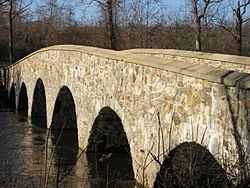 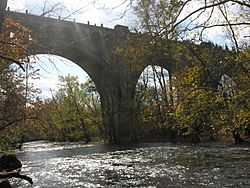 In the woods near Hainesburg is the Paulinskill Viaduct along the Lackawanna Cut-Off, the former main line of the Delaware, Lackawanna and Western Railroad. The viaduct, 115 feet (35 m) tall and 1,100 feet (335 m) long, was the largest reinforced concrete structure in the world when it was completed in 1910.

Route 94 passes through the northern portion of the township for 3.92 miles (6.31 km). U.S. Route 46 runs for 5.50 miles (8.85 km) through the township's southern portion. The Portland–Columbia Toll Bridge (part of Route 94), which is owned and operated by the Delaware River Joint Toll Bridge Commission, crosses the Delaware River and connects with Pennsylvania Route 611 in Portland, Pennsylvania.

Interstate 80 (Bergen-Passaic Expressway) is the main east-west limited access road, passing through the township for 7.24 miles (11.65 km) with a junction at Routes 94 and 46.

Much of Knowlton's development after 1850 can be traced to the presence of the five railroad lines that criss-crossed the township: the Delaware, Lackawanna & Western Railroad's Old Road and, later, the Lackawanna Cut-Off; the New York, Susquehanna and Western Railway; the Lehigh & New England Railroad; and the Blairstown Railway. In subsequent years, all of these rail lines have been abandoned. In their heyday, however, two rail lines and three railroads served the town of Delaware: the New York, Susquehanna and Western (formerly Blairstown) Railway; and the Old Road of the Delaware, Lackawanna and Western Railroad (which also had granted trackage rights to the Pennsylvania Railroad, technically a sixth railroad). The community of Columbia was also served by the NYS&W (Hainesburg also had a station), with the Lehigh and New England Railroad also passing through town.

In more recent years, development within Knowlton has been tied to the presence of U.S. Route 46 and, since the early 1970s, Interstate 80. Many Knowlton residents use Route 80 to commute to their jobs either further east in New Jersey or further west in Pennsylvania. Route 94 crosses through the township. Two bridges cross the Delaware River, connecting the township to Pennsylvania; the Portland–Columbia Toll Bridge, opened in 1953, connects Route 94 to Pennsylvania Route 611 in Portland, Pennsylvania. The two places are also connected by the Portland–Columbia Pedestrian Bridge, which dates back to a structure constructed in 1869 and was dedicated for pedestrian use when the vehicular toll bridge was completed in 1953.

Children in pre-kindergarten through sixth grade for public school attend Knowlton Township Elementary School as part of the Knowlton Township School District. As of the 2019–20 school year, the district, comprised of one school, had an enrollment of 155 students and 23.0 classroom teachers (on an FTE basis), for a student–teacher ratio of 6.7:1. In the 2016–17 school year, Knowlton had the 41st smallest enrollment of any school district in the state, with 192 students.

Students in public school for seventh through twelfth grades attend the North Warren Regional High School in Blairstown, a public secondary high school, serving students from the townships of Blairstown, Frelinghuysen, Hardwick and Knowlton. As of the 2019–20 school year, the high school had an enrollment of 752 students and 69.0 classroom teachers (on an FTE basis), for a student–teacher ratio of 10.9:1. The seats on the district's nine-member board of education are allocated based on the population of the constituent municipalities, with two seats assigned to Knowlton Township.

Students from the township and from all of Warren County are eligible to attend Ridge and Valley Charter School in Frelinghuysen Township (for grades K-8, with Knowlton students among those given admission preference) or Warren County Technical School in Washington borough (for 9-12), with special education services provided by local districts supplemented throughout the county by the Warren County Special Services School District in Oxford Township (for PreK-12).

People who were born in, residents of, or otherwise closely associated with Knowlton Township include:

All content from Kiddle encyclopedia articles (including the article images and facts) can be freely used under Attribution-ShareAlike license, unless stated otherwise. Cite this article:
Knowlton Township, New Jersey Facts for Kids. Kiddle Encyclopedia.