The now-defunct Pahaquarry Township was dissolved and absorbed by Hardwick Township on July 2, 1997. Pahaquarry Township had been created on March 14, 1825, and received its name from the word "Pahaquarra", which was a derivation of the Native American word Pahaqualong used by the Lenape meaning "termination of two mountains" (describing the mountain or mountainous area that was the area's southern border) or "the place between the mountains beside the waters".

According to the United States Census Bureau, the township had a total area of 37.923 square miles (98.221 km2), including 36.601 square miles (94.797 km2) of land and 1.322 square miles (3.425 km2) of water (3.49%). The part of the township east of the Kittatinny Ridge (the part excluding the now defunct Pahaquarry Township) is located in the Kittatinny Valley which is a section of the Great Appalachian Valley that stretches for 700 miles (1,100 km) from Canada to Alabama. The defunct Pahaquarry section of the Township which borders the Delaware River is located in the Minisink Valley that extends from the Delaware Water Gap north to Port Jervis, New York. 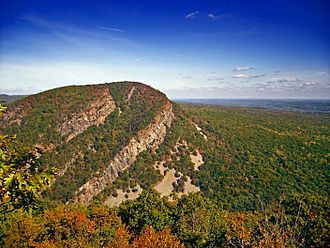 Sunfish Pond is a 44-acre (18 ha) glacial lake surrounded by a 258-acre (104 ha) hardwood forest located on the Kittatinny Ridge within Worthington State Forest, adjacent to the Delaware Water Gap National Recreation Area. The Appalachian Trail runs alongside the western and northern edges of the lake, which was created by the Wisconsin Glacier during the last ice age. The lake was declared a National Natural Landmark in January 1970.

Camp Ralph S. Mason is a YMCA, established in 1900, that covers 460 acres (190 ha) adjacent to the Delaware Water Gap National Recreation Area that serves approximately 800 campers in its summer camp programs and 7,000 participants at its outdoor center.

The Pahaquarry Copper Mine is an abandoned copper mine. Active mining was attempted for brief periods during the mid-eighteenth, mid-nineteenth, and early twentieth centuries but was never successful. The site is administed by the National Park Service.

There were 573 households out of which 33.9% had children under the age of 18 living with them, 67.9% were married couples living together, 6.5% had a female householder with no husband present, and 20.9% were non-families. 16.2% of all households were made up of individuals, and 7.3% had someone living alone who was 65 years of age or older. The average household size was 2.86 and the average family size was 3.19.

There were 502 households, out of which 38.6% had children under the age of 18 living with them, 74.3% were married couples living together, 5.6% had a female householder with no husband present, and 18.3% were non-families. 13.9% of all households were made up of individuals, and 5.2% had someone living alone who was 65 years of age or older. The average household size was 2.85 and the average family size was 3.15.

The only major roads that pass through are County Route 521 in the eastern part and Interstate 80 in the very west. The portion of I-80 also includes part of the Delaware Water Gap Toll Bridge which connects to Pennsylvania.

Old Mine Road, a scenic road that runs along the Delaware River, is said to be among the oldest roads in the Northeast used for the business purposes. It originates in Hardwick at I-80 and continues to the northeast into Walpack Township.

For kindergarten through sixth grade, public school students attend Blairstown Elementary School in Blairstown Township as part of the Blairstown Township School District. The Hardwick Township Board of Education was dissolved and merged into the Blairstown district as of July 1, 2009. The tax levies for the 2009-10 year were left unchanged, with the tax levy for subsequent years apportioned based 78.8% on enrollment and 21.2% on the equalized value of property on the two municipalities. As of the 2018–19 school year, the district, comprised of one school, had an enrollment of 466 students and 46.7 classroom teachers (on an FTE basis), for a student–teacher ratio of 10.0:1.

Students in seventh through twelfth grades for public school attend the North Warren Regional High School in Blairstown, a public secondary high school that also serves students from the townships of Blairstown, Frelinghuysen and Knowlton. As of the 2018–19 school year, the high school had an enrollment of 799 students and 77.6 classroom teachers (on an FTE basis), for a student–teacher ratio of 10.3:1. Seats on the high school district's nine-member board of education are allocated based on the population of the constituent municipalities, with one seat allocated to Hardwick Township.

Students from the township and from all of Warren County are eligible to attend Ridge and Valley Charter School in Frelinghuysen Township (for grades K-8, with Hardwick residents granted admissions priority) or Warren County Technical School in Washington borough (for 9-12), with special education services provided by local districts supplemented throughout the county by the Warren County Special Services School District in Oxford Township (for PreK-12).

People who were born in, residents of, or otherwise closely associated with Hardwick Township include:

All content from Kiddle encyclopedia articles (including the article images and facts) can be freely used under Attribution-ShareAlike license, unless stated otherwise. Cite this article:
Hardwick Township, New Jersey Facts for Kids. Kiddle Encyclopedia.