Stillwater Township is a township located in Sussex County, New Jersey, United States. Located in the Kittatinny Valley, Stillwater is a rural farming community with a long history of dairy farming. As of the 2010 United States Census, the township's population was 4,099, reflecting a decrease of 168 (-3.9%) from the 4,267 counted in the 2000 Census, which had in turn increased by 14 (+0.3%) from the 4,253 counted in the 1990 Census.

Stillwater was settled in the eighteenth century by Palatine German immigrants who entered through the port of Philadelphia. In 1741, Casper Shafer, John George Wintermute (Windemuth), and their father-in-law Johan Peter Bernhardt settled along the Paulins Kill. For the next 50 years, the village of Stillwater was essentially German, centered on a union church shared by Lutheran and German Reformed (Calvinist) congregations. The German population assimilated by the early nineteenth century, but evidence of their settlement remains in the architecture of the grist mills, lime kilns, and stone houses located throughout the valley. Stillwater was incorporated as a township by an act of the New Jersey Legislature on December 27, 1824, from portions of Hardwick Township when Sussex County was divided in half by the legislature a few weeks earlier to create Warren County. Portions of the township were taken to form Fredon Township on February 24, 1904.

In 2008, New Jersey Monthly magazine ranked Stillwater Township as its 40th best place to live in its annual rankings of the "Best Places To Live" in New Jersey.

The township was created on December 27, 1824, by an act passed by the New Jersey Legislature.

A prominent structure in the area's history is the Shafer Grist Mill. Originally built by Casper Shafer in 1741, it was moved approximately a half mile to its present location in 1764. It was rebuilt in 1844 and powered by water from the Paulins Kill. Casper's son, Nathan Armstrong Shafer lived in Whitehall Manor, which he built near what is now the center of the village. The gristmill operated commercially until 1955, making it one of the oldest, continuously operating, water-powered gristmills in the State of New Jersey. Aline Murray Kilmer, the widow of poet Joyce Kilmer, lived the last decade of her life at Whitehall, passing away there on October 1, 1941.

In the early 1900s, Swartswood Lake became a major resort. Weekenders took the train into nearby Blairstown through the 1940s to stay at such places as the North Shore Inn, The Casino, and The Dove Island Inn (now a private home). Later, summer cabins became popular with Brooklyn weekenders.

The Stillwater creamery was built in 1910. Borden, Inc. later took control of the creamery.

In the 1920s, the Paulinskill River was dammed to create Paulinskill Lake and many summer residences sprang up. These summer cottages have grown into what is now a year-round community.

The Presbyterian Church is the most prominent feature in Stillwater village. Opposite the church is the former Stillwater Academy, an old schoolhouse that is now home to the Stillwater Historical Museum. Stillwater was, and still is, primarily agricultural. The area is dotted with lime kilns, which used to burn lime to enrich the soil, but are now obsolete, becoming lost to history and the overgrowth of vegetation. An intact kiln still exists on Millbrook Road, a little more than two miles (3 km) from Stillwater village.

Roughly one-third of Stillwater Township's area was ceded to create Fredon Township in 1904. 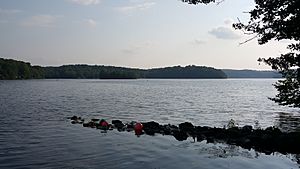 Swartswood Lake is the third-largest freshwater lake in New Jersey

Stillwater is a small one-street village in the area that was first settled by Johan Peter Bernhardt and his two sons-in-law, John George Wintermute and Caspar Shafer. At the western terminus of end of Main Street where it meets County Route 521, the First Presbyterian Church of Stillwater is the dominant feature. As Main Street travels east, the Stillwater General Store (originally Garris's General Store) (1876), "Whitehall" (built in 1785 by Abraham Shafer), Casper Shafer's stonehouse (c. 1741), crossing the Paulins Kill near Shafer's grist mill (1764, 1844) and miller's house. An 1820 hostelry, the Stillwater Inn, recently was destroyed by fire. One half-mile (800 m) south of the Presbyterian church, is John George Wintermute's stonehouse (1755), his son Peter's stonehouse (1791). Located adjacent is Stillwater Cemetery—the site of the original Lutheran-Calvinist union church (1771-1838), the graves of the towns earliest settlers, and many eighteenth century ethnic German gravestones.

Flanked to the west by Kittatinny Mountain, the Stillwater Township is located within the Ridge and Valley Physiographic Province, and the entire township is within the Kittatinny Valley a region of rolling hills and flat valley floors that is a section of the larger Great Appalachian Valley running 700 miles (1,100 km) from eastern Canada to northern Alabama. Elevations in this valley range from 400 to 1,000 feet (120–300 m). According to Snell, "The surface of the country is generally uneven and hilly, and on the west exceedingly rugged and mountainous. Ponds and watercourses abound. Of the latter, the most important is the Paulinskill, a millstream of considerable consequence." All of Stillwater Township is located in the Paulins Kill watershed which flows southwest through Sussex and Warren counties before joining the Delaware River near Columbia, New Jersey. The valley floor is part of the Ordovician Martinsburg Formation (shale and slate) which make up most of the valley—and the Jacksonburg Formation (mostly limestone).

Stillwater Township is located in Northwestern New Jersey which has a humid continental climate (microthermal)—a cooler climate due to its higher elevations.

There were 1,553 households out of which 30.0% had children under the age of 18 living with them, 61.4% were married couples living together, 7.6% had a female householder with no husband present, and 26.5% were non-families. 21.6% of all households were made up of individuals, and 6.1% had someone living alone who was 65 years of age or older. The average household size was 2.64 and the average family size was 3.09.

There were 1,494 households, out of which 41.0% had children under the age of 18 living with them, 67.6% were married couples living together, 6.7% had a female householder with no husband present, and 22.7% were non-families. 17.3% of all households were made up of individuals, and 5.8% had someone living alone who was 65 years of age or older. The average household size was 2.85 and the average family size was 3.27.

Stillwater is the home of Swartswood State Park, established in 1914 as the first state park established by the state of New Jersey. In the center of the park lies the Little Swartswood and Swartswood Lake. The park is operated and maintained by the New Jersey Division of Parks and Forestry.

Students in seventh through twelfth grade for public school attend Kittatinny Regional High School located in Hampton Township, which serves students who reside in Fredon Township, Hampton Township, Sandyston Township and Walpack Township. The high school is located on a 96-acre (39 ha) campus in Hampton Township, about seven minutes outside of the county seat of Newton. As of the 2018–19 school year, the high school had an enrollment of 941 students and 97.5 classroom teachers (on an FTE basis), for a student–teacher ratio of 9.7:1. Kittatinny Regional High School was recognized as a National Blue Ribbon School of Excellence in 1997–98.

People who were born in, residents of, or otherwise closely associated with Stillwater Township include:

All content from Kiddle encyclopedia articles (including the article images and facts) can be freely used under Attribution-ShareAlike license, unless stated otherwise. Cite this article:
Stillwater Township, New Jersey Facts for Kids. Kiddle Encyclopedia.