Aline Murray Kilmer (August 1, 1888 – October 1, 1941), was an American poet, children's book author, and essayist, and the wife and widow of poet and journalist Joyce Kilmer (1886-1918). The couple attended Rutgers College Preparatory School and married shortly after his graduation from Columbia University in 1908.

In their short marriage, lasting 10 years, her husband had achieved fame as a poet, literary critic and among Catholic circles as America's most prominent Catholic writer. After his death in World War I, she began publishing her own poetry and a few children's books. Today, her work is largely forgotten. 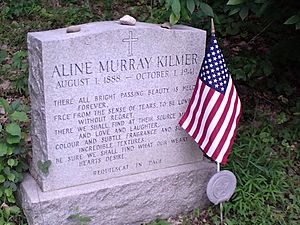 She was born as Aline Murray on August 1, 1888, in Norfolk, Virginia, the daughter of Ada Foster Murray, a poet; and Kenton C. Murray, editor of the Norfolk Landmark newspaper. Ada Foster Murray remarried on February 22, 1900, in Metuchen, New Jersey, to Henry Mills Alden. Henry was the managing editor of Harper's Magazine, and he became Aline's stepfather.

Aline was educated at the Rutgers College Grammar School (now Rutgers Preparatory School) in New Brunswick, New Jersey, and the Vail-Deane School in Elizabeth, New Jersey, the latter institution from which she was graduated in 1908.

Their daughter Rose was stricken with an infantile paralysis shortly after her birth, a crisis which led Joyce and Aline to convert to Roman Catholicism. Shortly before Joyce's deployment to France in World War I, Rose died. During his deployment, her husband was killed in action during the Second Battle of the Marne near Muercy Farm, beside the Ourcq River near the village of Seringes-et-Nesles, in France, on 30 July 1918 at the age of 31. Several years later, her second son, Michael, predeceased her.

After Joyce's death in Battle, Kilmer turned to publishing her poetry and to authoring children's books. Aline's poetry is described as "subtle, delicate, and somewhat subdued—certainly far from gayety" and with a tone of "ironic disillusionment" compared to her husband's as "direct, vigorous, gay."

In her final three years, Aline suffered from an excruciating illness. Aline Kilmer died at her home, "Whitehall", in Stillwater Township, New Jersey, on October 1, 1941, aged 52, and was interred at Saint Joseph's Catholic Cemetery in Newton, New Jersey.

Five lines from her poem, "Sanctuary", are inscribed on her gravestone:

There all bright passing beauty is held forever
Free from the sense of tears, to be loved without regret
There we shall find at their source music and love and laughter,
Colour and subtle fragrance and soft incredible textures:
Be sure we shall find what our weary hearts desire.

All content from Kiddle encyclopedia articles (including the article images and facts) can be freely used under Attribution-ShareAlike license, unless stated otherwise. Cite this article:
Aline Murray Kilmer Facts for Kids. Kiddle Encyclopedia.