Newton, officially the Town of Newton, is an incorporated municipality located in Sussex County, New Jersey, United States. It is situated approximately 60 miles (97 km) by road northwest of New York City. One of fifteen municipalities in the state organized as a town, the municipal government operates under a council-manager structure provided by the Faulkner Act, or Optional Municipal Charter Law. As the location of the county's administrative offices and court system, Newton is the county seat of Sussex County.

In the eighteenth century

Newton is located near the headwaters of the east branch of the Paulins Kill, a 41.6-mile (66.9 km) tributary of the Delaware River. In October 1715, Colonial surveyor Samuel Green plotted a tract of 2,500 acres (1,000 ha) at the head of the Paulins Kill, then known as the Tohokenetcunck River, on behalf of William Penn. This tract, which would not be settled for approximately 30–35 years, was part of the survey and division of the Last Indian Purchase by the West Jersey Board of Proprietors. At the time of Green's survey, northwestern New Jersey was populated with bands of the Munsee, the northern branch of the Lenni Lenape peoples.

The first recorded settler within the boundaries of present-day Newton was a German Palatine immigrant named Henry Hairlocker who arrived sometime before 1751 when he appears in Morris County records as receiving a tavern license. The Newtown Precinct, a large township, was created in 1751, and Sussex County was created from Morris two years later on June 8, 1753. The township would be named Newtown after the colonial village of Newtown in Queens, New York from where the Pettit family originated (the six Pettit brothers, all prominent landowners and influential figures in early local government, settled in northwestern New Jersey in the 1740s) or from its status as a "new town".

In 1762, Jonathan Hampton, of Elizabethtown, surveyed the location for a county courthouse and town green at the intersection of a military supply road he built during the French and Indian War and a major north-south artery called the King's Highway (present-day New Jersey Route 94). The construction of the courthouse was completed in 1765 and the village that developed around it became known as Sussex Court House. The county courthouse was the site of a raid by British partisan Lieutenant James Moody during the American Revolution.

In 1797, the village's post office was renamed Newtown and later, in 1825, the spelling was altered to Newton. Newton Township would cede land to create new townships on several occasions in the eighteenth and nineteenth-centuries, until a final division dissolved the township on April 11, 1864, through a legislative act of New Jersey Legislature that created the village of Newton as an incorporated town and two rural townships—Hampton and Andover.

Newton is located in the Kittatinny Valley, a segment of the Great Appalachian Valley. The Great Appalachian Valley is a gigantic trough—a 1,200-mile-long (1,900 km) chain of valley lowlands that stretches about from Quebec to Alabama and is the eastern-most edge of Ridge and Valley Appalachians physiographic province. This physiographic province, one of five in New Jersey, occupies approximately two-thirds of the county's area (the county's western and central sections) dominated by Kittatinny Mountain and the Kittatinny Valley. This province's contour is characterized by long, even ridges with long, continuous valleys in between that generally run parallel from southwest to northeast. The features of the Ridge and Valley province were created approximately 300–400 million years ago during the Ordovician period and Appalachian orogeny—a period of tremendous pressure and rock thrusting that caused the creation of the Appalachian Mountains. This region is largely formed by sedimentary rock.

Newton's land area drains into the watersheds of the Paulins Kill and Pequest River—two rivers that are tributaries of the Delaware River. These watersheds are separated by slate ridges that are part of the Martinsburg Formation. These slate ridges were quarried for slate for roofs and other industrial purposes beginning with a quarry opened by Elijah Blackwell in 1859 that operated under a series of different owners and commercial entities until 1930.

The Town of Newton is bordered to the north and east by Hampton Township, to the west by Fredon Township, and to the south by Andover Township.

Because of its location in the higher elevations of northwestern New Jersey's Appalachian mountains, Newton, as well as the rest of Sussex County, has a cooler humid continental climate or microthermal climate (Köppen climate classification Dfb) which indicates patterns of significant precipitation in all seasons and at least four months where the average temperature rises above 10 °C (50 °F) This differs from the rest of the state which is generally a humid mesothermal climate, in which temperatures range between -3 °C (27 °F) and 18 °C (64 °F) during the year's coldest month. Sussex County is part of USDA Plant Hardiness Zone 6.

During winter and early spring, New Jersey in some years is subject to "nor'easters"—significant storm systems that have proven capable of causing blizzards or flooding throughout the northeastern United States. Hurricanes and tropical storms, tornadoes, and earthquakes are relatively rare. The Kittatinny Valley to the north of Newton, part of the Great Appalachian Valley, experiences a snowbelt phenomenon and has been categorized as a microclimate region known as the "Sussex County Snow Belt." This region receives approximately forty to fifty inches of snow per year and generally more snowfall that the rest of Northern New Jersey and the Northern Climate Zone. This phenomenon is attributed to the orographic lift of the Kittatinny Ridge which impacts local weather patterns by increasing humidity and precipitation.

According to the USDA Natural Resource Conservation Service soil survey, the area receives sunshine approximately 62% of the time in summer and 48% in winter. Prevailing winds are typically from the southwest for most of year; but in late winter and early spring come from the northwest. The lowest recorded temperature was −26 °F on January 21, 1994. The highest recorded temperature was 104 °F (40 °C) on September 3, 1953. The heaviest one-day snowfall was 24 inches recorded on January 8, 1996 (combined with the next day, total snowfall was 40 inches). The heaviest one-day rainfall—6.70 inches— was recorded on August 19, 1955.

Newton is home to the Sussex County Historical Society's Hill Memorial Museum, the oldest continuously operating museum building in the state. The society, founded in 1904, offers a research and genealogical collection, and displays focused on the region's history, from Mastodon bones and Native American artifacts and from the Revolutionary War to World War II.

The Newton Theatre is a private business which offers frequent musical performances and stand-up comedy shows.

Newton's community offers a range of Christian houses of worship and one Jewish synagogue. These include:

Located one mile south of Newton, Newton Abbey, also known as St Paul's Abbey, is a Benedictine monastery established in the 1920s. 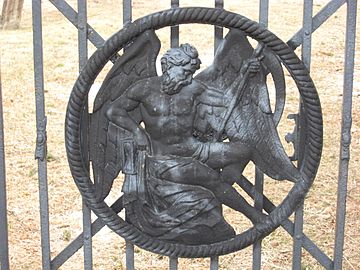 Founded in 1956, the Saint Joseph's Regional School was a private school affiliated with parish of Newton's Saint Joseph's Roman Catholic Church and overseen by the Roman Catholic Diocese of Paterson. St Joseph's provided classes from pre-kindergarten (ages 3–5) to seventh-grade for a total enrollment of 140 students. The school closed in June 2016 and was one of four schools that merged into Reverend George Brown School in Sparta Township, New Jersey.

Formerly the campus of Don Bosco College, a Roman Catholic seminary, the county government purchased the school's Newton property in 1989 for the use of Sussex County Community College, founded in 1981.

Sussex County Community College (commonly referred to as SCCC) is an accredited, co-educational, two-year, public, community college located on a 167-acre (68 ha) campus in Newton. The SCCC campus was formerly the site of Don Bosco College, a Roman Catholic seminary operated by the Salesian Order from 1928 until it was closed in the early 1980s and its campus sold to the Sussex County government in June 1989 for $4.2 million.

SCCC was authorized as a "college commission" in 1981 and began operations the following year. It became fully accredited in 1993 by the Commission on Higher Education of the Middle States Association of Colleges and Schools. SCCC offers 40 associate degree and 16 post-secondary professional and health science certificate programs available both at traditional classes at its campus, through hybrid and online classes, and through distance learning. Many students who attend SCCC transfer to pursue the completion of their undergraduate college education at a four-year college or university. The college also offers programs for advanced high school students, community education courses, and programs in cooperation with the New Jersey Department of Labor and Workforce Development. The school had an enrollment of 3,012 students of which half attended full-time and half attended part-time.

Skylands Park in nearby Frankford Township, is the home of the Sussex County Miners, who play in the Frontier League.

Local bus service is provided by the Skylands Connect bus, which connects to Sparta, Hamburg, and Sussex.

Newton Airport was a public-use airport located 3 miles (4.8 km) south of the central business district. The airport closed in 2013.

Newton Memorial Hospital opened in the early 1930s during the Great Depression. The medical center was established using funds from a willed gift of $35,000 from Thomas Murray (to be specifically used to establish a hospital in Newton) and a $100,000 bequest from Clarence Linn. The hospital "is a short-term, fully accredited, 146-bed acute care, not-for-profit hospital serving more than 250,000 people in Warren and Sussex counties in New Jersey, Pike County in Pennsylvania and southern Orange County in New York." Newton Memorial Hospital was bought by Atlantic Health System and changed its name to Newton Medical Center in 2011.

People who were born in, residents of, or otherwise closely associated with Newton include:

All content from Kiddle encyclopedia articles (including the article images and facts) can be freely used under Attribution-ShareAlike license, unless stated otherwise. Cite this article:
Newton, New Jersey Facts for Kids. Kiddle Encyclopedia.