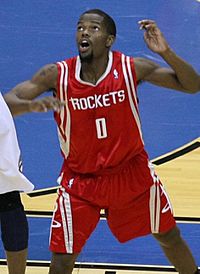 Aaron Jamal Brooks (born January 14, 1985 in Seattle, Washington) is an American professional basketball player. He currently plays for the Indiana Pacers of the NBA. He was selected 26th overall in the 2007 NBA Draft. He won the NBA Most Improved Player Award for the 2009–10 season. He also played for the Houston Rockets, Denver Nuggets, Phoenix Suns, and Sacramento Kings.

All content from Kiddle encyclopedia articles (including the article images and facts) can be freely used under Attribution-ShareAlike license, unless stated otherwise. Cite this article:
Aaron Brooks (basketball) Facts for Kids. Kiddle Encyclopedia.