Jeong is still a licensed physician in California but has since stopped practicing in favor of his acting career. He currently appears as a panelist on the American version of the singing competition show The Masked Singer and appeared on the first series of the British version. He also serves as the host of I Can See Your Voice.

Jeong attended Walter Hines Page High School, where he participated in the regional Quiz Bowl, was elected to student council and played violin in the school orchestra. He graduated in 1986 at the age of 16 and later went on to receive Greensboro's Youth of the Year award for his achievements.

Jeong began pursuing acting while a sophomore at Duke University. He briefly considered majoring in drama while still continuing his pre-med coursework. He graduated from Duke in 1990 and obtained his M.D. at the UNC School of Medicine in 1995. The summer before medical school, he took theater classes at University of California, Los Angeles (UCLA).

Jeong's background in theater and improv started while he was still a medical student in North Carolina. He was a regular at open mic nights in the Raleigh-Durham circuit, performing at Charlie Goodnights in Raleigh and Tootie's Durham Comedy Club. He also emceed The Comedy Spot programming series on Duke University campus 1992 and 1993 (produced by his friend Kendrick Jahng) opening for Margaret Cho, Jeff Dunham, and others.

Jeong completed his residency in internal medicine at the Ochsner Medical Center in New Orleans. 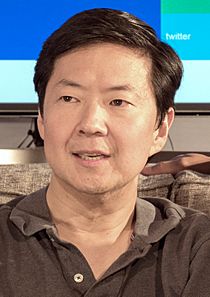 Jeong won the Big Easy Laff-Off in 1995 while still in residency. NBC president Brandon Tartikoff and The Improv founder Budd Friedman were judges and they both urged Jeong to move to Los Angeles.

Jeong moved to Los Angeles in 1998 and practiced medicine for several years as a physician of internal medicine at a Kaiser Permanente hospital in Woodland Hills. He began performing regularly at The Improv and Laugh Factory comedy clubs. His stand-up work has led to several television appearances, including NBC's The Office, FOX's MADtv, HBO's Entourage, and Curb Your Enthusiasm.

In 2002, Jeong landed a spot on Comedy Central's Comic Groove. Jeong was also on Kims of Comedy.

He made his film debut in Judd Apatow's Knocked Up as Dr. Kuni, which proved to be his breakout performance. From that point forward he was able to transition from medicine into a full-time career in the entertainment industry. Jeong gave up the practice in 2006 in favor of his acting career, however, he maintains his medical license and has assisted with medical emergencies during performances and on-set.

Early in Jeong's career, he studied with director Natalia Lazarus at the Los Angeles Performing Arts Conservatory where she coached him for his film debut in Knocked Up. Lazarus coached Jeong from 2006 - 2012 for all of his film and television roles through The Hangover Part II.

Subsequently, he has appeared in Step Brothers; Pineapple Express; Role Models as King Argotron; All About Steve; The Goods: Live Hard, Sell Hard; Couples Retreat; and as Mr. Chow in The Hangover, The Hangover Part II, and The Hangover Part III. He co-starred in Zookeeper and Transformers: Dark of the Moon, released in summer 2011.

Jeong played Señor Chang on the NBC sitcom Community and was nominated for the show's "Male Breakout Star" at the 2010 Teen Choice Awards. In fall 2010, Adidas basketball began a wide-ranging marketing campaign in which he starred as "Slim Chin", alongside NBA stars Dwight Howard and Derrick Rose. On May 22, 2011, he hosted the 2011 Billboard Music Awards in Las Vegas on ABC and was featured in a Hands Only CPR PSA campaign from the American Heart Association on June 15, 2011.

In 2012, it was reported that Jamie Foxx and Jeong have each agreed to star in movies written and produced by the other. Foxx has agreed to take a leading role in the Jeong's buddy comedy After Prom. Jeong, in turn, will star in Foxx's sports comedy All-Star Weekend. He also started as the voice of Dr Yap in the animated comedy series Bob's Burgers.

In 2013, he appeared in Michael Bay's Pain & Gain (2013), as Johnny Wu, a motivational speaker. Later that year, he returned in a significantly expanded role as Mr. Chow in The Hangover Part III. He voiced Kim Ly in the animated film Turbo (2013). In 2015, Jeong starred, wrote, and executive produced the pilot of his new ABC medical comedy, Dr. Ken, as a frustrated HMO doctor juggling his career, marriage, and parenting, but succeeding at none of them. On May 7, 2015, the series was ordered by ABC to debut in the 2015–16 TV season starring Jeong, Suzy Nakamura, Dave Foley, Tisha Campbell-Martin, and Jonathan Slavin. The series premiered on October 2, 2015.

In August 2018, Fox cast Jeong as a celebrity panelist on its upcoming music competition series The Masked Singer, based on the South Korean series King of Mask Singer. Additionally, Jeong appeared as a panelist on the first series of the British adaptation of the show. In January 2019, Jeong made a guest appearance on King of Mask Singer, performing "Creep" by Radiohead as the Golden Pig.

Jeong's first comedy special, You Complete Me, Ho, was released in 2019 on Netflix.

In February 2020, Fox named Jeong as host and co-executive producer of its upcoming music game show I Can See Your Voice, also based on a South Korean format.

In March 2020, Jeong started a podcast with fellow Community actor Joel McHale, The Darkest Timeline with Ken Jeong & Joel McHale, as a response to the social isolation brought on by COVID-19 pandemic.

Jeong's wife, Tran Ho, is Vietnamese American, a family physician, and a breast cancer survivor. They have twin daughters named Zooey and Alexa (born 2007). Jeong and his family reside in Calabasas, California. 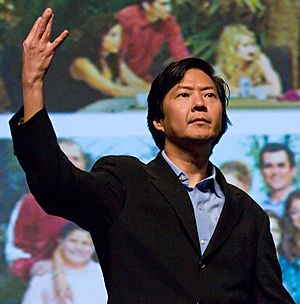 All content from Kiddle encyclopedia articles (including the article images and facts) can be freely used under Attribution-ShareAlike license, unless stated otherwise. Cite this article:
Ken Jeong Facts for Kids. Kiddle Encyclopedia.