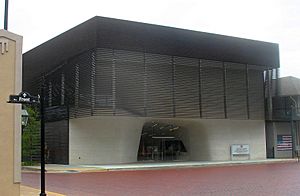 The museum had been fifty-five years in search of a permanent home. Many of the artifacts had previously been stored at Prather Coliseum on the campus of Northwestern State University in Natchitoches. Because of Hurricane Katrina there had been fear that the proposed museum would be deleted from approved projects in 2005 by the Louisiana Bond Commission. Then State Representative Taylor Townsend, however, informed Hall of Fame executive director Doug Ireland that the sports museum, unlike other similar proposals, had survived the vetting process. Natchitoches Mayor Lee Posey said the museum is a "tremendous" boost to Natchitoches-area tourism.

The first inductees were named to the Hall of Fame in 1958.

All content from Kiddle encyclopedia articles (including the article images and facts) can be freely used under Attribution-ShareAlike license, unless stated otherwise. Cite this article:
Louisiana Sports Hall of Fame Facts for Kids. Kiddle Encyclopedia.