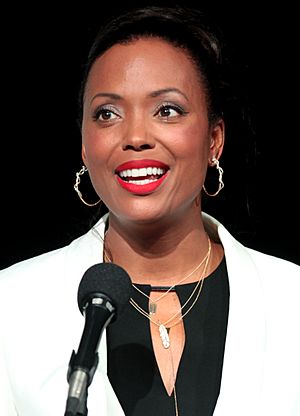 Aisha N. Tyler (born September 18, 1970 in San Francisco, California) is an American actor, writer, comedian and television host. She attended Dartmouth College studying political science. She then began as an advertising executive before becoming a Stand-up comedian in the mid-1990s. She was the host of Talk Soup. She was a cast member for two years in Friends. Tyler then played Andrea on Ghost Whisperer. She is a co-host on the daytime talk show The Talk.

All content from Kiddle encyclopedia articles (including the article images and facts) can be freely used under Attribution-ShareAlike license, unless stated otherwise. Cite this article:
Aisha Tyler Facts for Kids. Kiddle Encyclopedia.