The Key lime is a citrus hybrid with a spherical fruit, 2.5–5 cm (1–2 in) in diameter. The Key lime is usually picked while it is still green but it becomes yellow when ripe. It is smaller and seedier, with a higher acidity, a stronger aroma, and a thinner rind, than that of the Persian lime. The Key lime is valued for its unique flavor compared with other limes.

The name is derived from its association with the Florida Keys, where it is best known as the flavoring ingredient in Key lime pie. It is also known as West Indian lime, bartender’s lime, Omani lime or Mexican lime. Philippine varieties have various names, including dayap and bilolo. 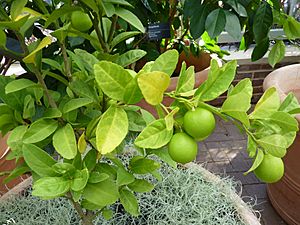 The English word lime was derived, via Spanish then French, from the Arabic word līma, which is itself a derivation of the Persian word limu. Key is from Florida Keys, where the fruit is naturalized.

The Oxford English Dictionary dates the first use of "key lime" to 1905, in an issue of Country Gentleman, which described the fruit as "the finest on the market. It is aromatic, juicy, and highly superior to the lemon." 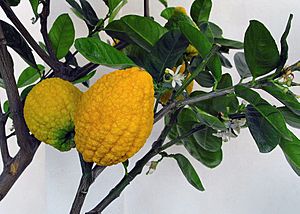 It is native to Southeast Asia. Its apparent path of introduction was through the Middle East to North Africa, then to Sicily and Andalucia and via Spanish explorers to the West Indies, including the Florida Keys. Henry Perrine is credited with introducing the Key lime to Florida. From the Caribbean, lime cultivation spread to tropical and subtropical North America, including Mexico, Florida, and later California.

Since the North American Free Trade Agreement came into effect, many Key limes on the US market are grown in Mexico, Central America and South America. They are also grown in Texas, Florida, and California. The Key lime has given rise to several other lime varieties. 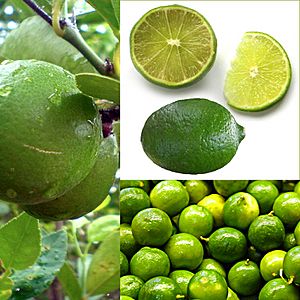 It is a shrubby tree, to 5 m (16 ft), with many thorns. Dwarf varieties exist that can be grown indoors during winter months and in colder climates. Its trunk, which rarely grows straight, has many branches, and they often originate quite far down on the trunk. The leaves have an oval shape, resembling orange leaves. The flowers are a yellowish white with a light purple tinge on the edges.

Flowers and fruit appear throughout the year, but are most abundant from May to September in the Northern Hemisphere. When in contact with the skin, the Key lime can sometimes cause phytophotodermatitis, in which a chemical reaction makes the skin extra sensitive to ultraviolet light. 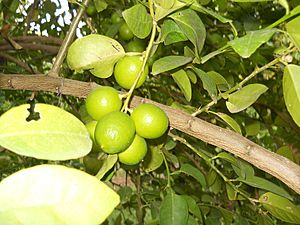 There are various ways for the cultivation of Key limes. This variety of citrus can be propagated from seed. The seeds must be kept moist until they can be planted, as they will not germinate if allowed to dry out. If the plants are propagated from seed, the seeds should be stored at least 5–6 months before planting.

Alternatively, vegetative propagation from cuttings or by air layering may permit fruit production within one year, and from genetically more predictable lines of plants. Or digging around a mature tree to sever roots will encourage new sprouts that can be transplanted to another location. 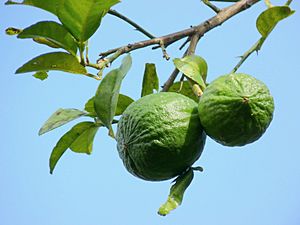 Climatic conditions and fruit maturation are crucial in cultivation of the lime tree. Under consistently warm conditions potted trees can be planted at any season, whereas in cooler temperate regions it is best to wait for the late winter or early spring. The Key lime tree does best in sunny sites, well-drained soils, good air circulation, and protection from cold wind. 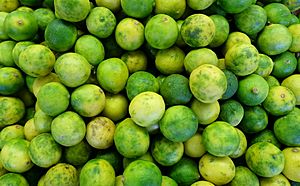 Key lime at the market

The method of cultivation greatly affects the size and quality of the harvest. Trees cultivated from seedlings take 4–8 years before producing a harvest. They reach their maximal yield at about 10 years of age. Trees produced from cuttings and air layering bear fruit much sooner, sometimes producing fruit (though not a serious harvest) a year after planting. It takes approximately 9 months from the blossom to the fruit.

When the fruit have grown to harvesting size and begin to turn yellow they are picked. To achieve produce of the highest market value, it is important not to pick the fruit too early in the morning as the handling of the fruit releases the peel oils and may cause spoilage. 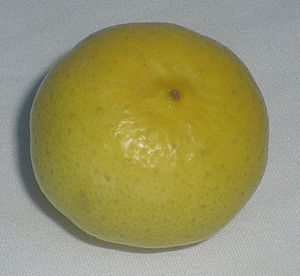 Shelf life of Key limes is an important consideration in marketing. The lime still ripens for a considerable time after harvesting. Special procedures are employed to control the shelf life – for example, applications of growth regulators, fruit wax, fungicides, precise cooling, calcium compounds, silver nitrate, and special packing material, but even in ideal conditions post-harvesting losses are high.

In India most Key lime producers are small scale farmers without access to such post-harvesting facilities, but makeshift methods can be of value. One successful procedure is a coating of coconut oil that improves shelf life, thereby achieving a constant market supply of Key limes. Key limes are made into black lime by boiling them in brine and drying them. Black lime is a condiment commonly used in the Middle East.

All content from Kiddle encyclopedia articles (including the article images and facts) can be freely used under Attribution-ShareAlike license, unless stated otherwise. Cite this article:
Key lime Facts for Kids. Kiddle Encyclopedia.