Key lime pie is an American dessert pie made of Key lime juice, egg yolks, and sweetened condensed milk in a pie crust. The traditional Conch version uses the egg whites to make a meringue topping. The dish is named after the small Key limes (Citrus aurantifolia 'Swingle') that are naturalized throughout the Florida Keys.

Key limes are more tart and more aromatic than the common Persian limes seen year-round at grocery stores in the United States. Key lime juice, unlike regular lime juice, is a pale yellow. The filling in a Key lime pie is also yellow, largely because of the egg yolks.

During mixing, a reaction between the proteins of the egg yolks and condensed milk with the acidic lime juice occurs that causes the filling to thicken on its own without requiring baking. Early recipes for Key lime pie did not require baking the pie, relying on this chemical reaction (called thickening) to produce the proper consistency of the filling. Today, because consuming raw eggs can be dangerous, pies of this nature are usually baked for a short time. The baking also thickens the texture more than the reaction alone.

On July 1, 2006, the Florida House of Representatives and the Florida Senate both passed legislation and selecting "Key lime pie" as the official pie of the state of Florida. 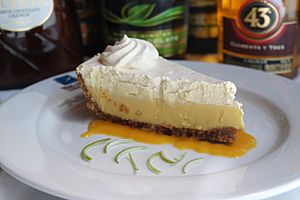 In 1935 Highway Traveler magazine mentioned "icebox lime pie" as a specialty of the Florida Keys. In 1940 a recipe for "Key Lime Pie" was published by June Brown of Buffalo, New York.

The Key lime pie has been traced back to the early 20th century in the Key West, Florida area. Its exact origins are unknown, but the first formal mention of Key lime pie as a recipe may have been made by William Curry and Key West's first millionaire; his cook, "Aunt Sally", made the pie for him. 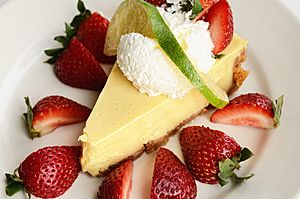 If this is the case, however, it is also possible and maybe even probable that Sally adapted the recipe already created by local sponge fishermen.

Sponge fishermen spent many days on their boats, and stored their food on board, including nutritional basics such as canned milk (which would not spoil without refrigeration), limes and eggs. Fresh milk was not a common commodity in the Florida Keys before modern refrigerated distribution methods. Sponge fishermen at sea would presumably not have access to an oven, and, similarly, the original recipe for Key lime pie did not call for cooking the mixture of lime, milk, and eggs. 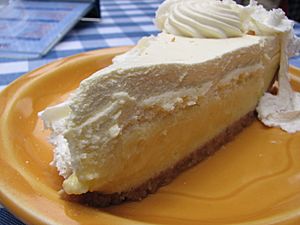 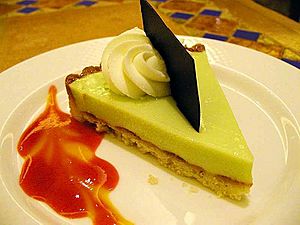 Beat egg yolks until light and thick. Blend in the lime juice, then milk, stirring until mixture thickens. Pour mixture into pie shell.

Beat egg whites with cream of tartar until stiff. Gradually beat in sugar, beating until glossy peaks form. Spread egg whites over surface of pie to edge of crust.

Bake in 350°F oven until golden brown, about 20 minutes. Chill before serving.

The annual Key Lime Festival started in Key West, Florida in 2002. It is held every year over the July 4 weekend and is a celebration of the use of Key limes in food, drinks, and culture.

All content from Kiddle encyclopedia articles (including the article images and facts) can be freely used under Attribution-ShareAlike license, unless stated otherwise. Cite this article:
Key lime pie Facts for Kids. Kiddle Encyclopedia.