Deer Valley or Deer Valley Village is one of the 15 urban villages that make up Phoenix, Arizona, United States. As of 2010, the population was 165,656, 25% of whom were under 18 years of age. The origin of the name is unclear; it first appeared on a 1921 General Land Office map of the area describing the valley created by Skunk Creek.

It is located in the northwestern portion of the city, and borders the cities of Glendale and Peoria. Within Phoenix, it borders four other urban villages (North Mountain, Paradise Valley, Desert View, and North Gateway). The village is 56.9 square miles (147 km2) in size and is centered at Interstate 17 and Arizona Loop 101. The core of the village includes commercial, industrial, and multifamily housing developments. Outer areas have more lower density residential land. 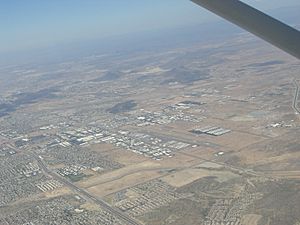 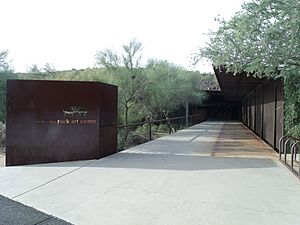 Deer Valley Airport, one of the busiest general aviation airports in the country is located in the village. Turf Paradise, a horse racetrack and Wet'n'Wild Phoenix, a 35-acre (14 ha) waterpark and the Arizona's largest theme park are both located in Deer Valley.

The Central Arizona Project canal carrying water from the Colorado River at Lake Havasu to Phoenix and Tucson passes through the village. The Deer Valley Petroglyph Preserve, a 47-acre (19 ha) archaeological site containing over 1500 petroglyphs, listed on the National Register of Historic Places and as a Phoenix Points of Pride, is located just west of the village core.

All content from Kiddle encyclopedia articles (including the article images and facts) can be freely used under Attribution-ShareAlike license, unless stated otherwise. Cite this article:
Deer Valley, Phoenix Facts for Kids. Kiddle Encyclopedia.