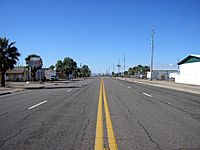 Aguila is a census-designated place in Maricopa County, Arizona, United States. It is located on U.S. Route 60 approximately 25 miles west of Wickenburg, or at approximately 50000 N. 510th Ave. Major economic activities include cantaloupe farming and formerly included mining. It uses the same street numbering system as Phoenix. As of the 2010 census, the population of Aguila was 798.

Aguila first appeared on the 1920 U.S. Census as the 52nd Precinct of Maricopa County. In 1930, it simply appeared as the Aguila Precinct. It was recorded as having a Spanish/Hispanic majority for that census (the census would not separately feature that racial demographic again until 1980). With the combination of all county precincts into three districts in 1940, it did not formally appear again until 2010, when it was made a census-designated place (CDP).

This area has a large amount of sunshine year round due to its stable descending air and high pressure. According to the Köppen Climate Classification system, Aguila has a mild desert climate, abbreviated "Bwh" on climate maps.

All content from Kiddle encyclopedia articles (including the article images and facts) can be freely used under Attribution-ShareAlike license, unless stated otherwise. Cite this article:
Aguila, Arizona Facts for Kids. Kiddle Encyclopedia.