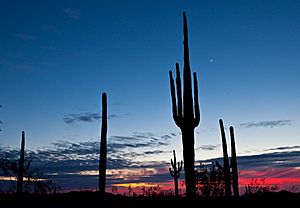 Sonoran Desert National Monument is south of Goodyear and Buckeye and east of Gila Bend, Arizona. Created by Presidential proclamation on January 17, 2001, the 496,400 acres (200,886 ha) monument is managed by the U.S. Bureau of Land Management as part of the National Landscape Conservation System. The BLM already managed the lands, however under monument status, the level of protection and preservation of resources is enhanced. Sonoran Desert National Monument protects but a small portion of the Sonoran Desert, which is 120,000 square miles (311,000 km2), and extends well into California and the country of Mexico. The North Maricopa Mountains, South Maricopa Mountains and the Table Top Wildernesses protect the richest regions of desert habitat from development.

The Sonoran Desert National Monument is unique among monuments in that its establishing Proclamation specifically mentioned the impacts of livestock grazing on Monument "objects." The Proclamation mandated the closure of all grazing allotments south of Interstate 8 at the expiration of their permits. The BLM was charged with determining compatibility of livestock grazing and resource protection for the grazing allotments north of the Interstate, which it has thus far not completed.

In his Proclamation, President Clinton wrote a description of the protected area:

"The Sonoran Desert National Monument is a magnificent example of untrammeled Sonoran desert landscape. The area encompasses a functioning desert ecosystem with an extraordinary array of biological, scientific, and historic resources. The monument’s biological resources include a spectacular diversity of plant and animal species. The monument also contains many significant archaeological and historic sites, including rock art sites, lithic quarries, and scattered artifacts. The most biologically diverse of the North American deserts ..."

The Monument is home to several federally listed endangered species.

All content from Kiddle encyclopedia articles (including the article images and facts) can be freely used under Attribution-ShareAlike license, unless stated otherwise. Cite this article:
Sonoran Desert National Monument Facts for Kids. Kiddle Encyclopedia.