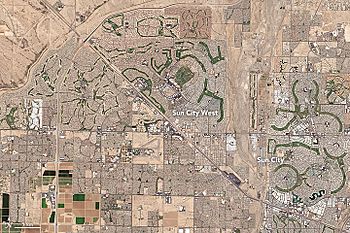 Sun City is an unincorporated community and census-designated place in Maricopa County, Arizona, United States, that is located within the Phoenix metropolitan area.

The population was 37,499 according to the 2010 census. Its adjoining sister city is Sun City West. Both cities are retirement communities popular with snowbirds.

Sun City was opened January 1, 1960, with five home models, a shopping center, a recreation center, and a golf course. The opening weekend drew 100,000 people, ten times more than expected, and resulted in a Time magazine cover story. The future retirement community was built on the site of the former ghost town of Marinette. Developer Del E. Webb expanded Sun City over the years, and his company went on to build other retirement communities in the Sun Belt. Sun City West was built in the late 1970s, Sun City Grand in the late 1990s, Sun City Anthem in 1999, and Sun City Festival in July 2006.

There were 23,490 households, out of which 0.3% had children under the age of 18 living with them, 49.5% were married couples living together, 3.0% had a female householder with no husband present, and 46.7% were nonfamilies. Individuals comprised 44.1% of all households, and 39.4% had someone living alone who was 65 years of age or older. The average household size was 1.60 and the average family size was 2.07.

The city has eight golf courses.

Sun City's four lawn bowling locations were among the sites for the 2019 US Lawn Bowling Open’s South Central Division.

A ballpark, Sun City Stadium, opened in 1971 and served as the spring training home of the Milwaukee Brewers from 1973 to 1985. Other teams to play their home games at the ballpark include the Sun City Rays of the Senior Professional Baseball Association in 1990, and the Mesa Solar Sox of the Arizona Fall League during 1992–1993. The ballpark was razed in 1995.

All content from Kiddle encyclopedia articles (including the article images and facts) can be freely used under Attribution-ShareAlike license, unless stated otherwise. Cite this article:
Sun City, Arizona Facts for Kids. Kiddle Encyclopedia.