Anthem was developed by Del Webb in 1999 as a master-planned community in the foothills approximately 34 miles north of downtown Phoenix. Anthem has been described as one of the best places to raise a family by Parenting magazine and one of the best family friendly neighborhoods in the Phoenix area by Phoenix Magazine.

On July 31, 2012, a storm dropped 5.01 inches of rain on Anthem in the span of 90 minutes, causing widespread flooding that damaged homes and required the rescue of nine people. A subsequent investigation into the flood concluded that the storm was a "one-in-1,000 year rain catastrophe."

Anthem is well known for the year round activities, primarily geared towards families. The community center offers youth soccer, baseball, basketball, tennis, various forms of martial arts, and swimming amongst other activities for ages as early as toddler years. HOA dues cover a pool larger than Olympic size, a community water park with slides and various depths for all swimming levels, paths that crisscross the town, bike paths that circle all major streets, and pocket parks scattered throughout the town. In addition, there is a 63-acre community park complete with an amphitheater, lots of grassy areas, volleyball, soccer, football, baseball and little league fields along with a train, pavilion, lakes and pagodas.

Anthem is built on 5,856 acres (9.2 sq mi) at the base of Daisy Mountain and Gavilan Peak. The community's elevation ranges from 1,760 feet to 2,428 feet, with an average elevation of 1,863 feet. Approximately 36 percent of the community is preserved as open space, including 291 acres of open hillside.

Anthem is cooler and receives a higher level of rainfall than nearby Phoenix.

Anthem first appeared on the 2010 U.S. Census as a census-designated place (CDP).

According to the American Community Survey, 11.8% of residents had attained a graduate or professional degree as their highest degree, 27.7% had a bachelor's degree, 7.8% had an associate degree, 26.9% had some college but no degree, 20.4% had only a high school diploma, and 5.5% had less than a high school diploma.

Interstate 17 is the primary connection between Anthem and Downtown Phoenix. A frontage road running along the east side of Interstate 17 and connecting Carefree Highway in North Gateway to Gavilan Peak Parkway in Anthem opened in October 2009. This frontage road connects to North Valley Parkway and Norterra Parkway in North Gateway, providing Anthem with surface street access to the rest of the Phoenix metropolitan area. Valley Metro does not provide bus service to Anthem; however, the agency can provide a vehicle for vanpooling service.

The Anthem Veterans Memorial is a monument dedicated to honoring the sacrifice and service made by members of the United States Armed Forces. The memorial's five white pillars represent the nation's military branches and are ordered in the size of each service. Each pillar has an elliptical opening that slants downward toward The Great Seal of the United States. On Veterans Day (November 11) the design allows the sun's rays to spotlight the Great Seal at precisely 11:11 AM. 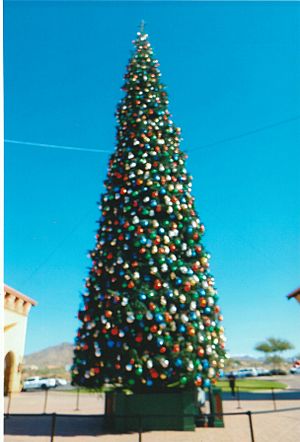 Anthem's Christmas Tree is the tallest in Arizona 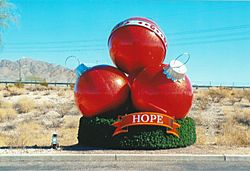 The community is serviced by several large chain retailers, including Fry's Marketplace and Walmart. The local outlet mall, Outlets at Anthem, includes over 60 stores. In 2015, a Safeway location was sold to Haggen, but that Haggen shut down shortly thereafter. As of January 2017, Safeway has reopened in the space that was previously occupied by Haggen.

The Anthem Community council has a committee on the treasury which deals with financial issues and elects a chairman to be in charge of this committee. Also, each of the three homeowner associations has a treasurer who deals with the monetary issues of their subdivision of Anthem

Anthem is served by the Deer Valley Unified School District (DVUSD) as well as several private and charter schools. The nearest colleges and universities are Glendale Community College, Paradise Valley Community College, and Arizona State University at the West campus.

All content from Kiddle encyclopedia articles (including the article images and facts) can be freely used under Attribution-ShareAlike license, unless stated otherwise. Cite this article:
Anthem, Arizona Facts for Kids. Kiddle Encyclopedia.