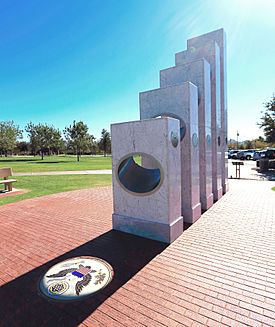 The Anthem Veterans Memorial is a monument located in Anthem, Arizona which was dedicated in 2011 to honor the sacrifice and service made by members of the United States Armed Forces.

The memorial's five white pillars represent the nation's military branches and are arranged in Department of Defense order of precedence: Army, Marine Corps, Navy, Air Force, and Coast Guard. Each pillar has an elliptical opening that slants downward toward The Great Seal of the United States. On Veterans Day – November 11 – the design allows the sun's rays to spotlight the Great Seal at 11:11 AM Mountain Standard Time. The design goal was 11:11:11 AM, but the variations each year cause the precise alignment over the next 100 years to be between 11:10:58 and 11:11:22.

Due to the leap years discrepancy between the official and astronomical calendar the effect can be observed at least one day before or after Veterans Day as well.

The award-winning monument is surrounded by 2200 red paving stones engraved with the names of veterans. The red stones, the white pillars and the blue Arizona sky represent the colors in the flag of the United States.

All content from Kiddle encyclopedia articles (including the article images and facts) can be freely used under Attribution-ShareAlike license, unless stated otherwise. Cite this article:
Anthem Veterans Memorial Facts for Kids. Kiddle Encyclopedia.