El Mirage is a city in Maricopa County, Arizona, United States. According to the U.S. Census estimates in 2019, the population of the city is 35,753.

According to the United States Census Bureau, the city has a total area of 9.7 square miles (25 km2), all of it land.

El Mirage is near Luke U.S. Air Force Base, the largest Fighter Pilot Training Base in the North Atlantic Treaty Organization (NATO), and can boast that it has the highest paid city manager per capita in the Phoenix, Arizona metropolitan area 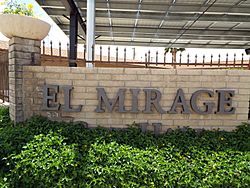 Front of the city hall building.

All content from Kiddle encyclopedia articles (including the article images and facts) can be freely used under Attribution-ShareAlike license, unless stated otherwise. Cite this article:
El Mirage, Arizona Facts for Kids. Kiddle Encyclopedia.