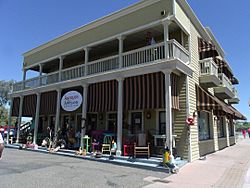 The Texas Hotel built in 1895. At first located in Vulture City, it was moved to this location circa 1904. Owned and operated by Everett and Myrtle Coxwell, the hotel had a restaurant on the street floor and eight rental units upstairs.

Vulture City is a ghost town situated at the site of the defunct Vulture Mine in Maricopa County, Arizona, United States.

Vulture Mine was a gold mine which was discovered in 1863. It was the most productive gold mine in Arizona history. From 1863 to 1942, the mine produced 340,000 ounces of gold and 260,000 ounces of silver. The Vulture mine was discovered when Henry Wickenburg, a prospector from California's gold rush, stumbled upon a quartz deposit containing gold while traveling in Arizona. Wickenburg began mining the outcrop himself.

There are two types of ghost towns. The first type is the town that continues to maintain a human population with the ruins or historical buildings within its limits, such as Tombstone. The second type is the town whose former residents have left and its ruins were left to the ravages of time. Vulture City falls into the second type of ghost town.

In 1863, after Henry Wickenburg discovered the Vulture mine, Vulture City, a small mining town, was established in the area. Vulture City’s post office was established on October 4, 1880, and Henry Wickenburg was the town’s first Post Master. The town had more than five boarding houses and several buildings. The huge Vulture Mine-Assay Office building, built in 1884, still stands today. The town also had cookhouse and mess hall plus stores, saloons and even a school. The town once had a population of 5,000 citizens. The town was marked by violence. Eighteen men were hanged on an ironwood tree located by the ruins of Henry Wickenburg’s house.

After the mine closed, the city was abandoned and its building decayed, becoming a "ghost town". The Vulture Mine and surroundings buildings are privately owned. The deposit was later sold to Benjamin Phelps, who represented a group of investors that eventually organized under the name of Vulture Mining Company. The mine continued to produce at a decreased level until World War II, when it was permanently closed.

The following are images of some of the structures which are still present in what once was known as Vulture City. Also included are some images of Vulture Mine.

All content from Kiddle encyclopedia articles (including the article images and facts) can be freely used under Attribution-ShareAlike license, unless stated otherwise. Cite this article:
Vulture City, Arizona Facts for Kids. Kiddle Encyclopedia.